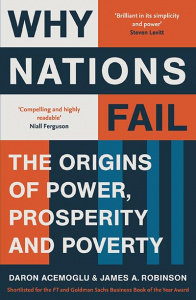 I picked up Why Nations Fail because it linked several subjects that I was interested in – mainly politics and economics, but it also includes geography, history and some philosophy.

It argues that some nations are wealthier and more prosperous than others because of their political and economic institutions (e.g. government, market system), and not because of their climates, geography or culture. Essentially, good (inclusive) institutions enable investment and a sense of security in the government and the economic system and so nations prosper, but bad (extractive) institutions do not. Virtuous circles of innovation, expansion and peace are formed from inclusive institutions which form a cycle of increasing prosperity.

This book is particularly interesting because it explains the theory with a huge range of historical examples from the past 200 years plus, focusing not just on the traditional western Europe and the USA vs. African developing nations, but touching on places across the world such as Asia, South America and Eastern Europe. It is especially interesting for anyone who is interested in the sources of poverty and inequality, along with the history of colonialism and feudalism. I didn’t find it too academic or hard to read; it was really accessible. I would recommend this book to anyone considering PPE, Economics, Geography or History and Politics.

In Why Nations Fail, the two authors set out to analyse the central question behind the field of developmental economics, and indeed the question that probably has the largest impact on the day-to-day life of the seven billion inhabitants of the Earth: Why are some countries richer than others? The historical explanations have ranged from the decidedly racist (genetic differences or  “protestant work ethic”) to the decidedly Marxist (imperial exploitation). While there is some truth to the latter, Acemoglu and Robinson argue forcefully that the main drivers of sustainable economic growth are good institutions – say, a legal system that sentences the cleaning lady and the earl equally harshly. They argue that, historically, this sense of equality has been very rare; most countries have had exclusionary policies designed to enrich the elites and exploit the poor majority. In turn, these policies have prevented technological innovation, as the existing elites fought tooth and nail against anything that might endanger their privileges.

So far, so good. Yet where the book gets interesting is when it documents how some countries managed to escape the aristocratic stagnation, beginning with England at the time of the Glorious Revolution in 1688 and ending with China and the open-market-policies of Deng Xiaopeng since 1979. The authors are fully aware of the political dimensions of their answer but refuse to support one side or the other. Protectionism is generally bad, unless free-trade-policies are simply exploited by the elites to the detriment of the working class; laissez-faire capitalism by itself is not sufficient as it inevitably results in ineffective monopolies, but socialism is not the answer either due to a lack of incentives; the West should do more to support the development of Africa but development aid risks simply reinforcing the local elites; and so on.

One metaphor that stands back crystal-clear in my mind is that of the divided city of Nogales which straddles the US-Mexican border. The two sides have very similar history, very similar geography, very similar genetic make-up of the population and very similar culture; yet the northern side is more than twice as rich as the southern side. Acemoglu and Robinson manage to give a clear and exhilarating account of why that is the case, and what could be done to ensure that one day in the future, South Nogales can enjoy the prosperity of North Nogales.

Something that has always interested me is the disparity in prosperity, rights and stability between different nation states across the world. Particularly since many of the things that we may initially think lead to the success of nations, in reality do not. The sluggish economic development of many resource rich nations and increases in both wealth and stability in authoritarian regimes in east Asia, challenge our notion of what makes a nation successful.

Why Nations Fail attempts to take an inter-disciplinary approach, trying to get to the heart of where the origins of the success of a nation lie. The writers Daron Acemoglu and James A. Robinson argue throughout, that the success of a nation can be attributed to the extent to which that nation’s institutions can be considered to be inclusive. In the eyes of the authors, it is inclusive political and economic institutions, which incentivise investment and innovation, through their protection of human and property rights, that ultimately lead to the success of a nation. They draw upon a wide array of examples, such as differences in intellectual property rights, and the impact that this has had in prosperous nations whilst contrasting this with the lack of such rights in poorer nations. Whilst this argument may be challenged by the emergence of China and its willingness to tolerate the violation of such rights in many instances, this is nonetheless a compelling argument.

The authors draw upon a huge range of case studies to support their assertions, many modern and many historical, making the book engaging and extremely informative. Overall, this book reads well and assumes no prior knowledge, therefore I would highly recommend it to anyone with a desire to gain a better understanding of the world and the reasons for the phenomena we observe.

I love this book. It’s likely that any aspiring student of economics will also love this book. So, this review is mostly going to argue why any prospective economist should read Why Nations Fail.

Secondly, this book is incredibly accessible as every economic concept used is thoroughly explained and the language used is often very easy to follow. This really is a very important factor in my recommendation of this book. This is because some other econ books can be so overly pretentious with their arguments, and they assume so much previous knowledge from their readers. Consequently, this dramatically reduces the readers’ enjoyment of the book as it is mostly incomprehensible to them.

Thirdly, Why Nations Fail does not solely focus on economic theory. This is excellent because 450 pages filled with maths-inspired theory can be rather daunting. In fact, there is no maths involved. This is good news because there is plenty of time whilst you do your degree to develop your mathematical techniques. Instead, this book is very helpful to novice economists because it really expands your intuition about some of the more difficult questions on the subject.

Moreover, there are clear links between economics and politics throughout the book. This is a positive thing because it expands your overall understanding of the issue of development. This is because there are very various forces at play and to simply focus on economics would do a disservice to understanding the development problem. So, this book puts a big emphasis on political institutions and their effect on a country’s development. There is a big focus on the distinction between extractive and inclusive institutions.

Overall, Why Nations Fail is a great book filled with lots of relevant examples. This is amazing because it really expands your contextual understanding of the issue of development. Personally, I decided to study economics for the cliché reason that I want to understand how the world works better. This book certainly helped improve my understanding of that and it will probably improve your understanding as well.