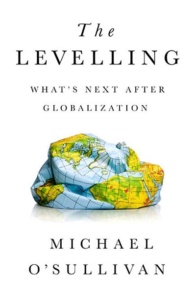 Before applying, I was focused on finding books that allowed me to bridge my interest in the two disciplines of politics and economics. Michael O’Sullivan’s The Levelling provides an analysis of the current turbulent times in world affairs, both from an economic and geopolitical context.

O’Sullivan begins by recapping where we are and illustrating the issues facing the world in 2018. He speaks of high debt levels, the rise of populism, protectionist policies, nationalism, and general political instability as countries become more polarised. He then moves on to his predictions for where the world will head in the coming years. The world will become divided into 3 poles, the US, Europe, and China, with some countries, notably the UK, Japan, and Russia having to find a way to balance the delicate position between poles. Before the pandemic, we saw the beginnings of this movement as the UK began to balance the interests of the US with the interests of Europe. He also argued that the role of major international institutions like the UN will be diminished as countries focus on working multilaterally on a smaller scale, through mediums like the Quad.

From an economic standpoint, O’Sullivan speaks of how quantitative easing may have harmed the economy and discusses the difficult consequences if this is not reigned in. He also suggests the primary solution to low growth levels is intangible infrastructure, such as access to and quality of healthcare, quality of institutions, and the rule of law. Importantly, O’Sullivan predicts the general collapse of America’s superpower status, and with it the collapse of the world order as we know it. This we can start to see today as the rising power of China is leaving the US with diminished influence in developing countries.

Finally, the most important argument he makes to bridge politics and economics would be the ideas surrounding the disconnect between politicians and people. We saw this with Brexit and the election of Trump, the hardship people face such as rising inequalities and costs of living as well as feeling that they are not being listened to on important political issues. These issues, if not addressed may lead to the breakup of traditional political parties as the internal ideological divisions become too big to ignore.

Although O’Sullivan presented an unrelenting pessimistic case for the future of the world, he did provide some solutions which he believed were critical to changing course. This prompted me to think of my own solutions and what changes I would make to his proposals to achieve the same ends. Further reading proved useful in forming these opinions, as although written only in 2018, many of O’Sullivan’s ideas are seemingly outdated even though such little time has passed. Interestingly, this book will provide you with a realistic depiction of where the world was headed before the pandemic, allowing you to make your own conclusions as to whether the world will return to that course, or chart a new one.