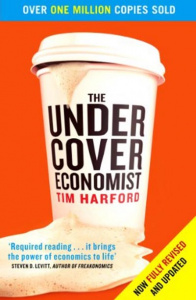 When I was thinking about applying to university I wanted a book that would introduce me to some of the main economic issues yet wouldn’t take me weeks (or even months) to read and that perhaps I even enjoyed. I didn’t really know much about Economics so wanted to get a feel for whether it was worth considering studying. My teacher encouraged me to read The Undercover Economist– I’m really glad I did! It is an interesting book which definitely brings economics to life in a way that even those who have never studied Economics before would understand.

The book covers a wide variety of issues, from why coffee shops charge the prices they do to why poor countries are poor, which makes it particularly fascinating. Through these examples Tim Harford explains a variety of complex economic issues in a fun and simple way that anyone can understand. For example, he talks about supermarkets increasing profits through price-targeting strategies, such as by selling “Value” products in poorer areas and “Finest” products in richer ones; in doing so he covers topics such as elasticity of demand, which I had never heard of before. I found it really interesting to see issues such as these, many of which I had noticed but never considered, explained in such an easy to understand way.

It’s much better to get a good understanding of the basic economic issues in preparation for applying to university rather than having attempted to read a long, boring, complex book which you don’t really understand. This book is perfect for this purpose. Additionally, we can all relate to the engaging and amusing case studies Harford uses, often from his own experiences, which helped me to understand the importance economics plays in daily life, often in areas I had never realised before. It definitely motivated me to study Economics as I realised how important the subject is. So for anyone who is vaguely considering Economics or a related degree (or even if you’re not!), The Undercover Economist is well worth reading, and it definitely won’t take days and days to read!

I was a bit daunted about where to start when it came to trying to understand economics – I often found that newspapers etc. would talk about budgets, recessions, trade and so on without giving an idea of what the real underlying economic theory and principles were. The Undercover Economist, written by Tim Harford, is great for this – requiring no previous knowledge of the subject, it starts by explaining a lot of important and interesting economic ideas using comparisons and analogies that relate the economics to everyday issues. For example, the recent banking crisis and the recession that followed are beautifully explained through a comparison with an egg factory dealing with rotten eggs: essentially the location and detection of subprime mortgages or “rotten eggs” was extremely inaccurate.

But each chapter isn’t just a rudimentary run through of theory – instead Tim Harford finds ways to bring in questions and answers to a lot of everyday issues such as the prices of coffee in Starbucks to the economics behind traffic jams. A lot of the ideas that he explains are then applied to bigger issues such as the development of China and the economic inefficiencies of Africa, which I found exciting as it excellently linked some key economic ideas to current affairs.

Finding a good introduction to economics can be hard because it’s a very widespread subject with some pretty dense theory, but for me The Undercover Economist laid out the basic concepts in a simple but amusing and useful way.

All of our video book reviews can be seen on our YouTube channel.