The Return of Depression Economics 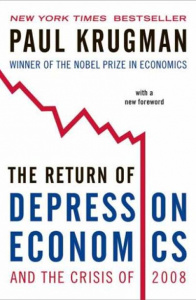 Paul Krugman may be a Nobel Prize winning economist and an acclaimed professor of economics, but he doesn’t write how you’d expect a Nobel Laureate to. His clear prose and unwillingness to use unintelligible economic terms in The Return of Depression Economics make it a joy to read. Choosing a subject to dedicate three years of your life to at university can be tough, especially if you’ve never studied it at school before, so books like this can make that decision much easier. It certainly enlightened me as to what Economics is like, even though I had very little knowledge prior to turning the first page.

The first half of the book covers what Krugman claims are the clear indicators we all had that the 2008 financial crisis was coming. Few economists, central bankers or politicians predicted the meltdown of the global economy, but Krugman eloquently details the similar precursors to it, particularly the Asian and Latin American crises of the late twentieth century. Had we paid more attention to these, he asserts, it is likely that the global crash’s catastrophic effects could have been reduced at the very least.

Subsequently, Krugman explains the events leading up to and precipitating the crisis of 2008. In particular, speculation and the manner in which it can cause bubbles which often have catastrophic effects if not controlled by central banks, as they were not for several decades. Furthermore, the book examines the growth of the unregulated shadow banking sector and assesses the impact that complex financial instruments that few people understood had on the lives of everyday people across the world.

The Return of Depression Economics is a fascinating, entertaining and concise introduction to macroeconomics and the shocks economies across the world have faced over the last hundred years.