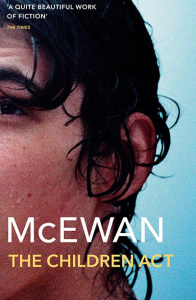 The Children Act is the story of a judge and a hard case. Fiona Maye is a High Court judge in the Family Division. She takes over when families fall apart. Like when an ultra-orthodox Jewish father refuses to let his children attend the more liberal Jewish school chosen by their mother. Or when a husband promises his estranged wife that she can keep the house, if she pays off the mortgage, but goes away and sells it behind her back.

Once in a while, though, she is confronted with a really hard case. Here she has two. Both are based on real events. In the first, a Cypriot couple come to England for the wife to give birth to Siamese twins. It soon becomes apparent that both children will not survive unless they are separated. The weaker twin is not viable on her own. She is sapping the other twinʼs strength. She has an underdeveloped brain, and will not live for long. But she is a person, and for now at least she is alive.

Her sister, by contrast, will be able to live a normal life. Reconstructive surgery will erase the traces of her past. But first she must be separated from her twin, and separation would involve killing the weaker of the two. In law that is murder, regardless of the fact that it is done in an operating theatre. The parents, staunch Catholics, are opposed to the operation. They would rather let both twins die. The doctors say that this is nonsense. If they can save the stronger twin, then the stronger twin should be saved. So, they go to court, and seek a declaration that killing the weaker twin would be lawful. Fiona Maye has to decide.

The other strand to the story, also lifted almost verbatim from an existing case, is about a teenager who is just a few months shy of turning 18. He is a Jehovah’s Witness and he has leukaemia. The doctors know that they have a 90 percent chance of saving his life if he accepts a course of blood transfusions. But Jehovah’s Witnesses are prohibited by their doctrine from accepting the blood of another. The boy is deeply committed to his faith. He refuses the transfusion with his parents’ consent. The consulting oncologist refuses to let him go, and the hospital bring the case to court.

It lands on Fiona Mayeʼs desk one late evening, after a raucous argument with her husband. And so the novel begins. It is a moving, highly intelligent insight into the moral dilemmas which the law is called upon to resolve. I came to the novel having first read the cases with which it deals and loved it. But on reflection I think that it might have an even greater impact on someone who knows nothing about the law and has never read a case. They would immediately understand that to study the law is, in a sense, to study a form of literature, but one in which the stories are real and the consequences matter.