The Best I Could 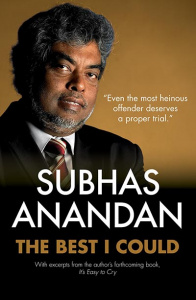 There has always been no question that murderers, rapists and conmen – the archetypal “bad guys”—should be severely dealt with under the rule of law. I believed that justice could only be achieved by prosecuting and dealing out harsh sentences to such individuals. However, after reading Subhas Anandan’s autobiography, The Best I Could, I realised that my conception of justice was perhaps too simple and narrow.

What would it be like to defend your country’s most notorious criminals? Anandan’s biography provides this unusual take on the criminal legal scene. Anandan was Singapore’s most prominent criminal lawyer, earning a reputation for representing the perpetrators of Singapore’s most grisly crimes. In his autobiography, he recounts cases from the span of his illustrious career. This includes the story of “the One-Eyed Dragon”, a former triad leader who was found guilty of gunning down a night club owner. Anandan also represented Leong Siew Chor, who had murdered his lover, chopped up her body into seven parts and dumped them at various places across the island. Anandan also details his encounters with Anthony Ler, who had persuaded a 15-year-old to murder his wife.

Anandan’s stories are gripping and striking. However, I could not help but wonder—why would he choose to represent clients who, for the most part, were to all intents and purposes, guilty? Anandan explains that “even the most heinous offender deserves a proper trial… Why should anybody say that he is guilty when the court has not found him guilty yet?” I realised then, that this too, was a means of achieving justice.

Through reading the book, I felt the strength, compassion and firmness that Anandan had in working with his various clients, and better understood the emotional turmoil that came with his work, which could easily seem to be in conflict with one’s values. Anandan’s vivid storytelling humanized the criminals, providing an intimate take on many high-profile criminal cases. I was also introduced into the complexities of the law. In the case of Aniza Bte Essa, the defendant received a lenient sentence compared to her teenage lover, whom she had manipulated into murdering her husband. This apparent disjunction unnerved me, but ultimately sparked my interest in law.

Written in plain English, and interjected with funny stories from Anandan’s youth, this book will certainly not disappoint.