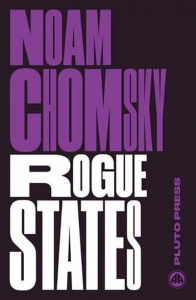 At college, a couple of years before applying to university, I knew that I loved the general study of international relations, but I was craving an outlook that differed from the literature I had already worked from, which had focused predominantly on the United States’ (supposedly right) dominant position in world politics.  I stumbled across Noam Chomsky’s Rogue States when frantically scanning Waterstones for books which might help me write my Extended Essay on the impacts of the conflict in the Middle East, during my second year of the International Baccalaureate. Having previously only been exposed to western-centric literature, my automatic thought was that this book would tell me all about the “rogue” nature of Middle Eastern states… Chomsky’s outlook on the international political system was quite extraordinary, and certainly not what I had initially expected. The whole book is based on the, rather radical, foundational stance that the US itself is a rogue state. Now, this certainly had never crossed my mind, and I was curious to know more.

The use (and abuse) of power, in the form of both military capability and economic prowess, within the international arena is the central theme in the book. Chomsky explores this through analysing the ways in which the US has moulded international institutions to continually reinforce the hegemonic position it already holds. I was particularly fascinated to learn about the way in which the US projects a saviour-like image of itself to the rest of the world, through organisations such as the United Nations, in order to amplify the perception of the US as a state that acts legitimately, while arguably operating in the opposite fashion. This value of soft power (influence) was first introduced to me while reading the book, and I found myself so encapsulated by the idea, I ended up looking into it further in parallel with my studies of modernisation theory.

It certainly wasn’t the easiest book I’d ever picked up, especially compared to the political yet fictitious ones I’d previously experienced, like Orwell’s Nineteen Eighty-Four (which I certainly would also recommend). So, it took me quite a while to tackle some of the essential concepts it centred around and most of the academic terms used. I found that, to begin with, I was looking up every other word used by Chomsky in order to understand the rather complex points he was making, yet the amount of knowledge and insight I gained from it was well worth the effort! Not only this, Rogue States gave me a whole new perspective that I could bring with me to the Oxford interview room.