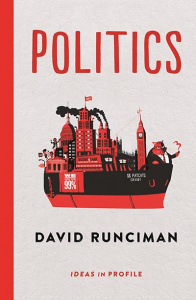 An accessible and enjoyable introduction to politics and political philosophy.

I stumbled upon Politics quite by chance and it was one of the first books I read before I applied because it brought together my enjoyment of history at school with my interest in politics, which I had not previously studied. Runciman opens with juxtaposing descriptions of past and present situations observed in Denmark and Syria demonstrating that politics explains their different paths.

He then divides the book into three key parts – explaining what politics is at its best and worst, why it still matters even in the age of Google and what its limits are (in the face of massive global inequality). The scope of the book turned out to be larger than I first realised. It covers a broad range of key issues from the gap between rich and poor to the impact of social media, via political philosophers such as Machiavelli, Hobbes and Weber. His transition between these appears seamless to the reader and he manages to make even the more complex political theories seem easy to understand. Meanwhile in the epilogue he discusses the future of democracy in light of the history of political societies, while also introducing the reader to arguments concerning the concept of a world government. Runciman introduces all of these concepts in a way that is not overly-academic and gives the reader an insight into them so that he leaves you wanting to learn more.

The book acted as a starting point for me that led to my discovering other books on my subjects. I looked into Peter Singer’s philosophy after reading the section devoted to his drowning child problem and, from the suggested readings listed at the end of “Politics”, happened upon Ha-Joon Chang’s 23 Things they don’t tell you about Capitalism. What’s more, there has even been an essay during my time at Oxford where I’ve ended up quoting a particular section of this book which focuses on the ideas of Benjamin Constant and the parallels drawn with disenfranchisement in contemporary political systems.

David Runciman is the Head of the Department of Politics and International Relations at the University of Cambridge and this book is the first in a series called “Ideas in Profile” in which leading political scientists ask the big questions about politics: what is it, why we do we need it and where is it heading? At around 150 pages and with his clear writing style, it’s a really concise and accessible introduction to the subject of politics and other connected subjects. I would recommend this book to anyone considering PPE, Economics, History and Politics or who is just keen to improve their understanding the contemporary world.