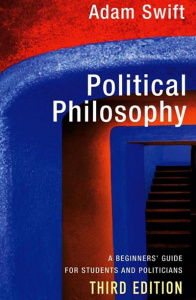 I knew that I was interested in politics from a young age, but until I was in Year 12 this only meant following the big stories in the news. I could tell you who’d won the latest by-election, and what the big topics in PMQs had been that week, but I knew next to nothing about political theory as an academic subject, beyond the basic ideas of left and right or socialism and liberalism. When I was thinking about applying for politics as a degree, my history teacher told me that I absolutely had to read Swift’s book. Despite the glowing review, it took me a while to get around to it. I felt like I was being kept busy enough by my A Level subjects, and in any case it takes a bit of motivation to start a book – an entire, academic book – on a Saturday morning in September when all you want to do is lie in bed.

As soon as I started it, though, I found myself unable to put it down. This book seemed like gospel, very simply written but every word and argument chosen carefully. It made politics seem like a completely new, fresh subject. Ideas like “liberty”, “equality” and “justice,” which politicians always evoke as though they were simple, are completely picked apart. It turns out that these ideas can conflict with each other – there is usually a trade-off between most conceptions of liberty and community, for example – but also that they can often be self-conflicting. No politician in this country would ever claim to be anti-equality, for example, and the idea is stretched in all sorts of directions, but taking it to its theoretical extreme produces horrendous results.

The book starts with a long discussion of social justice – not something I considered myself particularly interested in before I read it. The question it asks is simple: why should Tiger Woods, Bill Gates or any corporate lawyer earn more than a social worker, a school teacher, or even someone who is voluntarily unemployed? It may be because they deserve it more, or because it isn’t the place of “society” to force them to give up what the earn. It could equally be, though, that there is no way of justifying such drastic inequalities in income. If this is right, how much should the government be able to force them to give up? The book actually introduces some huge thinkers – Rawls, Nozick, Hayek – into discussion but the big names are never intrusive. What’s more useful than being able to recite the big theories is having a really good understanding of the building blocks that are used to construct them all.

It’s rare to find an introduction to political theory that is also a page-turner, but Swift manages it. If you think you might be interested in politics but want to go further, this is certainly the right book to read.