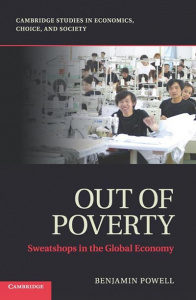 My desire to study Philosophy, Politics and Economics (PPE) first started with my interest in economics. Economics was the only subject of the three that I took at A Level so I started some super-curricular reading around the subject. Of course I started with the classic The Undercover Economist, which I would also recommend – its popularity is well deserved and it’s definitely an enjoyable and informative read! The Undercover Economist led me to a book called Out of Poverty: Sweatshops in the Global Economy by Benjamin Powell that not only heightened my interest in Economics but also encouraged me to explore the fundamentally linked nature of Philosophy, Politics and Economics, and demonstrated the importance of an inquisitive approach to life.

Through exploring how sweatshops are the best option of work for those working in them, Out of Poverty: Sweatshops in the Global Economy provides a comprehensive defence of third-world sweatshops. When I first read the descriptions of sweatshops as a “symptom, not the cause, of shocking global poverty” and also as a preferable option to possible alternatives I was shocked. I had always thought that sweatshops were exploitative and I had never even considered the argument that the alternative employment prospects for those that work in them were considerably worse, let alone thought that sweatshops were worthy of a defence. However, Out of Poverty alerted me to complexity of issues surrounding whether sweatshops were worthy of a defence, including issues such as the alternative forms of employment available, for example employment in agriculture, and also the control employees have over determining their own compensation package (their wage rate and the conditions in which they work).

Powell encouraged me to agree that sweatshops provide vital employment to those who work there but also highlighted the importance of an exploration into the ethics of sweatshops. Powell explored various philosopher’s views and introduced Kant’s view that an end cannot justify a means and that humans should only ever be considered as ends in themselves and not means. The way in which the need to consider economic, philosophical, and political issues was made so clear in the book really excited me about the prospect of studying PPE!

Moreover, Out of Poverty: Sweatshops in the Global Economy was definitely an engaging read and was easy to get stuck into. Broad economic knowledge was not required as Powell’s explanation was always thorough and concise. Throughout Powell also backed up his arguments with empirical evidence, which I thought was really interesting to consider.

I would definitely recommend this book to anyone considering studying PPE, Economics and Management or other similar degrees. In addition to highlighting the interlinked nature of Philosophy, Politics and Economics, I believe it also highlighted the importance of asking “why?”, which is vital in all walks of life. I had always taken the argument that sweatshop should be boycotted as a given but Powell encouraged me to ask “why?” and thinking about the subject further led me to disagree with the view I had originally thought was a given.