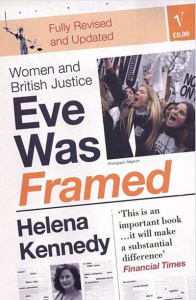 Baroness Helena Kennedy’s Eve Was Framed: Women and British Justice is so much more than a book about law. It is not a book which will tell you what the law is, in which situations to apply the law, how the law is passed etc. That would be function of a textbook. This book is a polemic and therefore asserts Kennedy’s opinion on the injustice of the criminal law by critiquing the intimidating nature of court with the paraphernalia of wigs and gowns, assessing the impact of this mystical element of the law, and talking about her experiences as a very successful female barrister. If you want to learn more about law than the law itself, for example the wider impact of the law on women, social classes and ethnic minorities, then this book is the one for you.

I initially started reading this book during the summer before coming up to Oxford as a way to fill the gap between the end of A Levels and the start of term; I wasn’t expecting to gain much aside from passing the time. However, whilst reading the introduction and highlighting opinions I support and share, I realised I had come across the first book about law that I actually enjoyed reading for the sake of reading, rather than to have something to talk about if I inadvertently found myself in an academic discussion.

In particular, I enjoyed Kennedy’s imaginary court procedure: Eve is being tried for causing of the Fall of Man because she ate from the forbidden tree in the Garden of Eden. Kennedy envisages the speech for the prosecution, the defence’s response, and wittily comments “transportation from Paradise is one thing, but a sentence of eternal damnation when the conviction has to be based on the uncorroborated testimony of a co-accused must surely constitute a breach of human rights!”

The tone of the book is chatty and informal, the vocabulary is complex at times but nothing a dictionary can’t fix, and overall this book gave me a true appreciation of justice as opposed to simply the letter of the law- I couldn’t recommend it enough.

This book by Helena Kennedy QC is a detailed discussion of how our legal system treats women. Baroness Kennedy is a leading barrister and she gives insightful detail into her own experiences as a female lawyer and the everyday sexism she has encountered in her career. She also takes a wider look at how the way our law is written and enforced can discriminate against women.

I read this book during the summer before coming to Oxford and it has proved surprisingly useful in my studies so far. At the start, Kennedy warns that this book is not to be treated as an academic account but as a polemic, her own take on how our law fails women. However, while studying criminal law I found myself constantly drawing on her accounts of how women have been treated in famous cases and how our laws struggle to deal with female victims and defendants. For example, one of the first pieces of legislation you would study in criminal law as Law student at Oxford is the section of the Coroners and Justice Act 2009 dealing with the partial defence to murder of loss of control. This was designed to help people who are victims of domestic violence and go on to kill their abusive partner. However, the courts continue to struggle to deal with this issue effectively. Kennedy details several well-known cases and gives her interpretation of how the courts have failed to adequately take the defendant’s situation into account.

Even when the area of Law you are studying is not directly mentioned in this book, I believe it serves as a useful reminder to always think about how the law affects different societal groups. Kennedy is particularly good at focusing not just on how the law treats women but how it treats black women, poor women, women who suffer mental health problems and other groups which have been treated poorly by our legal system in the past (and the present). This focus on “law in context” rather than “black-letter law” (what the law actually says) helps you approach law in a more rounded and considerate way. It makes you ask “why” the law works the way it does and how it could treat a certain issue more effectively.

This book is a relatively quick and easy read, so it makes a nice break from the normal hefty law textbooks that the degree entails. But despite its size, I believe it has been one of the most important things I have read in impacting how I study Law. I would encourage anyone with an interest in Law, male or female, to read it. As a profession and an academic subject, Law can still seem dominated by men and this book is an important reminder of how far we still have to go.

Eve Was Framed is an eye-opening analysis of the disadvantages that women face in the criminal justice system. Helena Kennedy highlights the ways in which bias plays a role in courts through her own experiences as a barrister, as well as drawing upon case law.

I read this book in the summer before I applied to university because I was hoping to find something that was different to the books that give you a general introduction to law. This was definitely different. Now that I have started studying the subject, I still find myself reflecting on some of the propositions she puts forward. In particular, she often talks about how most judges are completely out of touch with the general population, which can definitely impact their judgement. Particularly when I read old cases, I certainly see what she means!

Before reading the book, I thought trials were fairly simple processes and that, most of the time, the judiciary are easily able to ascertain if someone is innocent or guilty. This book highlights that sexism is so pervasive in courts, things are never quite so straightforward. Kennedy speaks about how people find it harder to believe women when they don’t conform to certain stereotypes associated with women. If a woman is loud, or very confident, this will have an impact on the way a judge and jury will view her. I found it shocking that things like that could actually influence the outcome of a woman’s trial.

Interestingly, she suggests that the way to achieve equality is for the law to recognise that most women experience very different lives to men and that it should adjust accordingly. This really got me thinking about how we should deal with inequality in the law. Although it is clear that there is injustice, the solutions to this are not always obvious.

I strongly recommend this book for anyone who is interested in law. It will give you an understanding of how law interacts with wider society and how rules will impact different groups in different ways. It will give you a sense of the context in which law is applied, which, as a law student, I find incredibly valuable.

Misbehaving: The Making of Behavioural Economics

The Return of Depression Economics