How Democratic is the American Constitution 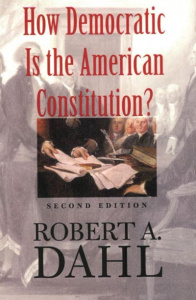 By Robert A. Dahl
Review by Tom F (PPE)

The American constitution is perhaps one of the most revered objects in all of politics – characters in films say something is unconstitutional as if it were the worst possible thing that anything could ever be. If you want to gain hefty support in American politics, say “constitution” every 10 words or so. So, when somebody takes a shot at it, it’s a deeply brave move on their part. When the blow lands, it’s a good read as well.

Robert Dahl does just this, guiding you through all of the American constitution’s weird elements that don’t fit with its supposedly democratic principles, like the fact that in the US senate, 500,000 people in Wyoming have the same power as 40 million in California, or that someone can win the presidency with less votes than their opponent, or that the constitution was, for a long time, pretty okay with slavery. We are told all the time how wonderfully democratic the US constitution is, but Dahl’s alternative side of the argument lays waste to this view, and feels like an eye-opener given what we are always told.

Admittedly, the work is one of political science, and the appendixes are filled with tables and statistics and analysis, but that shouldn’t put you off as Dahl feeds you all the relevant points in a conversational form, assuming no prior knowledge of his kind of analysis. But this conversational form, as well as making the book accessible, means that when Dahl becomes angry, and he does, you really feel the full brunt of his argument, and are swept along with him – in other words, he makes you care. Despite having very little experience of American politics at the time of reading, he captured the injustice of the situation – a nation held back democratically by an outdated document that it still chooses somehow to love – and made me feel it too. It’s clearly a remarkable work of political science – often perceived as a dull, dreary dry discipline – that can make you feel angry about a country that you’re not a citizen of, an entire ocean away.