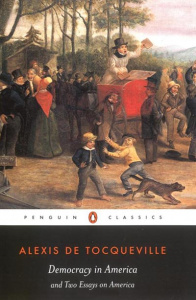 This was the book that had the greatest impact on the way I related to the people around me. That’s a big claim to make, and as I write these words I can’t help feeling surprised at the thought. I was certainly sceptical at the time. After all, what can a 150 year old treatise on American democracy, written by a young French aristocrat, have to say of any relevance to us about our communities and what it means for them to work well? Far more than I thought possible.

When Tocqueville went to America, he probably shared the view of most of his countrymen that democracy was doomed to fail. Democratic government, they thought, could only tear itself to pieces. The fear wasn’t absurd. If everyone has an equal voice in the making of the laws, why should anyone accept their authority? A democratic society would surely be a firestorm of chaos and anarchy. What Tocqueville discovered, however, was quite different. When he looked beyond the institutions and the laws, and burrowed deep into the lives of American citizens, Tocqueville saw that as democracy spread into their lives, they developed a deep-seated taste for order, material comfort, peace and security.

The upshot of all this is a terrible irony: the stronger democracy became, the quicker public squares and townhouses were emptied. The more conscious Americans were of political equality, the more they turned away from their fellow citizens and delegated the task of government to an ever larger, ever more anonymous state. Thinking that the private interest should always defeat the public interest, and that all civic duties should be subjected to the blind pursuit of personal wealth, they stood down from the job of governing to better pursue their own affairs. Instead of ruling themselves, they were once more being ruled. They may have been more equal, but they weren’t any more free.

There is a lot here that is of huge relevance for us today: the idea that democracy is not an end in itself, that it does not necessarily make us more free, or better citizens, or our communities any stronger. This is not a conservative position. I actually find Tocqueville very radical. He forces us to consider how the fact of political equality – the fact that we all share the same rights – is a tremendous source of progress, and yet nevertheless affects individual liberty in uncomfortable ways. Not only because the majority can browbeat the minority. But also, more alarmingly, because it leads us to turn away from politics and civic engagement, and forget that liberty is a thing to be valued for its own sake.