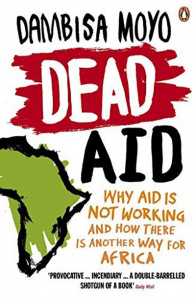 By Dambisa Moyo
Review by Anna (Philosophy, Politics and Economics)

What drew me to this book initially was that it dealt with an economics topic about which I was genuinely passionate. Having never studied economics before applying to read PPE, I felt daunted by the prospect of “reading around a subject” – where do I start? I knew that I was particularly interested in the economics of development and foreign aid, and so I picked up Dead Aid which tackles this debate. Moyo simultaneously manages to speak in-depth and so precisely about a topic I was eager to learn about, as well as addressing some wider, more general concepts in economics. By coating a new and blatantly terrifying subject in something I was interested in, it made the introduction to economics much easier to stomach.

In general, this book deals with the issues associated with foreign aid. Controversially, it presents an argument that aid is damning African countries into poverty, rather than helping them. To do this, it looks at the historical evidence, real-life Sub-Saharan examples and draws on Moyo’s own experiences – making it a riveting and more personal read. She then presents alternatives to the current system, providing interesting thinking points and springboards for further reading and discussion. The theories presented in these last few chapters sparked such imagination that I ended up including them in my final personal statement – especially the chapter entitled “The Chinese Are Our Friends”. These sections are structured very clearly, making it an easy book to devour in one sitting or to skim through if particular areas interest you more.

What makes this book a pleasure to read is Moyo’s enthusiasm. Some books of this nature tend to be very dry, yet the author’s sheer rage shines through, helped in part by her personal experiences and aggressive writing style. Her opinion is blatantly evident throughout the text, making identifying bias easy for a less experienced audience. The fact that this book is written for the general public, instead of just academics makes it much quicker and more enjoyable to consume.

If you are interested in African politics, international relations, trade or foreign aid, this book is such a good route into Economics and a great way to help you form your own controversial opinions about current economic issues.

Dead Aid, by Dambisa Moyo, explores the malignant nature of aid, thus challenging traditional views which accredit foreign aid with reducing poverty through stimulating economic growth in some of the world’s most deprived states.

She empirically backs up her claims, using compelling statistics such as the fact that poverty in Africa rose from 11% to 66% between 1970 and 1998, when flows of aid to Africa were at its peak. By-products of this include the fact that the continent is plagued with soaring illiteracy rates, infant mortality rates and the lowest life expectancy in the world, around 60 years of age.

It is clear to see that there is a “paradox of aid”, where countries that supposedly need foreign aid the most cannot benefit from any amount of it. This can be explained by many factors, but the most profound factor mentioned in the book for me was the “conditionalities”. Historically, receiving aid through Western institutions like the World Bank and IMF was made contingent upon adherence to neoliberal economic policies, which sometimes left states worse off than they were prior to receiving aid. They were often forced to reduce the size of the public sector and heavily privatise economic methods which may have worked in the West, but were largely unsuitable for Sub-Saharan Africa. The fact that the same demographic of people who perpetuated economic stability in the region through colonialism now sought to control these countries economically highlighted how timelessly entrenched the unequal “world system” is. Moreover, this illustrates how it is very much in the best interests of the West for these countries to remain in their dire state, as it assures that they rely on the West and the West’s economic superiority continues.

Moyo argues that aid should stopped to the continent as a whole to force countries to engender their own economic plans to kickstart recovery and growth, urging that aid-dependency should be halted as soon as possible. This could look like increased trade with emerging economies or entrance to capital markets and policies which increase domestic savings through remittances and microfinance. She does acknowledge that the success of this is dependent on corruption-free political will and does cite the need for Western activists to cultivate this.

This book fiercely challenges traditional economic and political thought surrounding aid, and it acts as a refreshing reminder that Africa has the capability to instigate their own economic success, if they were to be released from the shackles of aid-dependency.