31BC Antony, Cleopatra and the Fall of Egypt 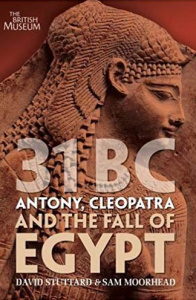 Stuttard and Moorhead’s analysis of the relationship between Mark Antony and Cleopatra in 31BC Antony, Cleopatra and the Fall of Egypt was one of the first Egyptology books I’d ever read and definitely influenced my decision to study Egyptology, although I would recommend this book to anyone, even if Ancient Egypt isn’t something you’d like to study at degree level. I found this was a great book to start with as an introduction to the subject as most people have at the very least heard of Cleopatra even if they know nothing about her, and reading about an area you have even a very minimal understanding of, as opposed to something that is completely alien, can definitely make learning more about a new topic much less daunting.

One aspect of the book I really liked and found helpful was the fact that there was a clear narrative and events were told and described in a chronological order. Personally, I felt this made understanding what was being discussed much easier, especially in comparison to, for example, The Oxford History of Ancient Egypt by Ian Shaw which, whilst being a fantastic book that provides a detailed overview of Egypt’s history, can at times feel like you’re being bombarded with facts and can become a bit overwhelming. Also, the fact that it covers so many different aspects of the history makes it a really good introductory book, especially for the Ptolemaic/Late Egyptian period. It discusses not only the relationship between Antony and Cleopatra, but also touches on the role and position of women during this period, the relationship between Egypt and Rome and the eventual “fall” of Egypt as a dynastic country, so it’s great for helping you start to get an idea of which area of Egyptology you’re most interested in.

Reading this book certainly helped to prepare me for my degree in terms of including primary sources, mostly from Greek and Roman historians such as Appian and Cicero. I found this to be really helpful as I’d previously been unsure where our knowledge of the Egyptians came from and whether it was all based on hieroglyphic inscriptions. The book was also good at introducing you to the issues surrounding the use of these historian’s works and the biases and historical context that has to be considered. The dangers of taking the story told in texts at face value is something that crops up repeatedly during your degree.

I chose to read the book as part of research for my EPQ which focused on Antony and Cleopatra, but I would absolutely recommend reading it just for fun or to get an overview of the final decades of what we consider “Ancient Egypt”: it’s a fascinating read and a great place to start!

Flying Too Close To The Sun

Korea’s Place in the Sun