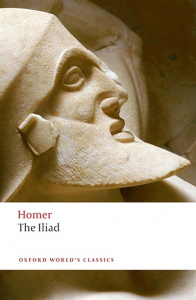 By Homer
Review by Anneka (Classics)

When it came to choosing a subject to study at University, I found myself stuck between English and Classics — I just couldn’t bring myself to give up either (though you can actually do both at Oxford in a joint degree!) In the end, it was reading The Iliad that made me want to study Classics.

The Iliad is an epic poem written by a poet called Homer. Who, exactly, Homer was, is a mystery, but their poem is the oldest piece of Greek literature we have today, and it’s one of the most influential works of literature in history.

It’s a poem about the mythical Trojan war — a ten-year war fought by the Greeks against the Trojans about Helen of Troy, the most beautiful woman in the world. Heroes from a golden age loom large in and amongst the carnage of the battlefield — Achilles and Odysseus, Hector and Sarpedon — and so do the gods themselves from their home in the sky, Olympus. But it’s also about far more than that. Achilles seeks to be immortalised forever for his deeds at Troy, but how much will he sacrifice? Hector alone can save Troy, but Troy is destined to fall; can one man save his family and his city? Homer captures the struggles of these two enemies  and their respective sides with haunting insight. The Iliad becomes a poem not just about the Trojan war but every war. There is human triumph against formidable odds, but also suffering lurking underneath everywhere. Even Zeus, father of the Gods, cannot save those he loves from death.

These images of life and death, love and war, and gods and mortals have inspired people in every age all over the world. In a Classics degree, you luckily get to study both the ancient text and its interpretations. A few of my favourites are Shakespeare, Yeats (especially ‘No Second Troy’), Madeline Miller’s The Song of Achilles and of course Hollywood’s Troy. Another tip is the artwork on the British Museum’s website for their 2019 exhibition ‘Troy: myth and reality’, which is all inspired by the Trojan war.

I hope you find something in The Iliad that moves you too!