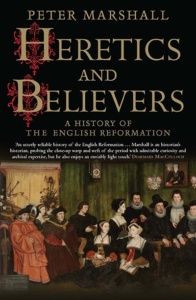 This book is possibly the best introduction to late medieval religion and its transition under the Henrician reformation. Now, I know I am probably one of the few fans of religious history (it has so much drama and gossip) but hear me out — it’s fun, I swear! I will acknowledge that it is a long read — almost dauntingly so, and if I am being honest, I don’t think I’ve finished it yet. Nonetheless, it is a fabulous book to get you into medieval religion as it fleshes out all aspects of late medieval religion using (often hilarious in hindsight) case studies and demonstrates the popularity of the medieval Church on the eve of the Break with Rome.

The most memorable case study from the book is a story of the social tensions and conflict that arose when rituals were performed in a parish. John Browne, in the Essex parish of Theydon-Garnon, smashed a pax (a liturgical object that the congregation would kiss) over the head of a parish clerk in anger at him receiving the pax later than he expected — what drama! On a more academic side, it can lead to a wider discussion of the importance of materiality in religion, which is the study of religious objects and their meanings. I would argue that Marshall’s use of these samples is his strength in this book, and it prompts wider discussions beyond A-Level topics and importantly, can be linked to historical methods (which is of importance to this History degree as the Approaches to History paper can be taken in some colleges). For example, it is highly beneficial for a historian to think beyond the study of history itself, and instead, draw on other disciplines. This was especially handy for me as art was my favourite subject at school. The study of how history can draw on art can illuminate the importance of visual literacy of the laity (ordinary people) through painting and stained glass, as the majority were unable to read textual scripture, which I was fascinated by. This was because it made me consider the challenges that individuals in medieval England faced without the ability to read and I realised that stained glass in my local church was in essence the main method of religious communication centuries ago.

Overall, this book will provide you with such a good understanding of religion and how it was the basis of all community life in medieval England and even if that’s not your cup of tea, it has the most bizarre yet fascinating case studies that I have ever read in a book. On a non-academic level, I simply love how this book enabled me to visualise the past in a way that I have been unable to replicate since — definitely give it a read if you can!