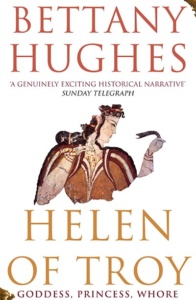 Hughes’ Helen of Troy explores the truth behind the myth of the Trojan War and its catalyst – Helen. Hughes recreates Helen through literary and archaeological evidence, rendering her as a Mycenaean aristocrat, taking the reader back to the foundations of what a ‘real’ Helen may have looked like, stripping back the layers of her historical guises.

Following Hughes’ journey to uncover the reality of such a prominent and enigmatic figure was incredible. In drawing the female position in classical mythology and history to attention, the author re-frames what the reader believed about Helen; I found it interesting to be able to consider different versions of Helen, following her from classical tradition all the way through to the manipulation of her character in the 19th and 20th centuries. Exploring different views and uncovering hidden truths about historical figures and considering those who have been written out of history are, in my opinion, at the heart of the study of Classics.

Hughes is an inspiring author, being an honorary founder of Classics for All and one of the BBC’s 100 Women in 2013, amongst many other achievements – her exploration of gender and culture in the ancient world is highly successful and intriguing.

Helen of Troy is one of the best books I’ve read, and I’d recommend it to any potential Classicists who share similar interests and values with regards to the classical world. Helen is a fundamental character to many people’s understanding of Classics, and learning the truth about her was fascinating!