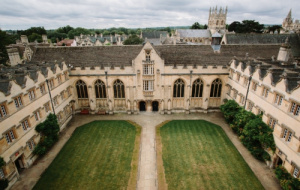 The 2021 William of Durham Annual Recognition Day was held virtually on Saturday, 22 May 2021. The event recognises those members of Univ who have pledged a legacy to the College, and those who are considering this special form of giving.

Baroness Amos, the Master, provided an update on the College and Angela Unsworth MBE, Domestic Bursar, Giles Underwood, Director of Music and Jonathan Cheesman, Boat Club Coach, shared with us the challenges they have faced in their roles during the pandemic. You can listen to a podcast of the event below. We also heard some music from our wonderful Martlet Voices.

Angela Unsworth MBE, Domestic Bursar, was awarded an MBE in 2014 for “outstanding and dedicated personal commitment to improving the services and support to all personnel and their families” at RAF Linton-on-Ouse where she was Squadron Leader. As Domestic Bursar, Angela oversees the provision of services and facilities, such as accommodation, catering, housekeeping and security, which support the overall organisational aims of the College. She was instrumental in setting up links with Univ’s partner charities, The Gatehouse and Aspire, and worked with Aspire, St Mungo’s and Oxford City Council, to support homeless people in the community during the early stages of the COVID-19 pandemic last year.

Giles Underwood, Director of Music, is a singer, teacher and conductor with a background steeped in the tradition of the highest quality choral and ensemble singing. He was a boy chorister at Westminster Abbey, sang in Magdalen College Choir as an undergraduate and trained in opera at the Guildhall School of Music and Drama. He is now a professional ensemble singer and soloist with orchestras such as The Academy of Ancient Music and The Orchestra of the Age of Enlightenment. He was appointed Professor of Singing at the Royal Academy of Music in 2016, having previously held a professorship at the Guildhall School of Music and Drama. At Univ, Giles runs the Chapel Choir, directs The Martlet Ensemble and Martlet Voices, and organises numerous concerts, workshops and other extra-curricular musical activities in College. He also chairs the panel for the Mendl-Schrama Prize in Music at Univ.
Find out more about music at Univ here.

Jonathan Cheesman, Boat Club Coach, has been coaching at Univ for the past two and a half years and has been overseeing the club coaching programme whilst focusing on coaching the M1 and W1 crews. Before coming to Univ he was the Head of Rowing at Lady Eleanor Holles School in Hampton. He has been coaching for 30 years and has coached at all levels, from beginners to Internationals; and all ages from 12 all the way up to masters in their 80s. He has extensive experience coaching University athletes, having coached at both Newcastle and Cardiff Universities.