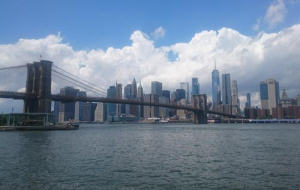 I woke up on the Tuesday morning feeling excited for my trip, but couldn’t help notice a slight tingling in my throat. I had had a fever and headache the previous day so I was slightly concerned but I took some meds and put it aside, as I was too excited for my trip and had some last minute packing to do. After saying my goodbyes I made my way up to Manchester Airport to catch my first flight to London. By the time I got to Manchester airport that afternoon the tingling had turned into a full scale sore throat and I was a bit worried about being uncomfortable on the flight. I took some more meds and got on my flight to Heathrow. The 35 minute flight was quite pleasant. It felt as if we had just taken off when suddenly we were landing in London. With only an hour to change in Heathrow I made my way to my gate for my New York flight. At this point I could feel the excitement building. All I had to do was get through the 8 hour flight. The flight itself was pleasant, but my throat was dry and irritable the entire way. Luckily I was on an aisle seat, something I wasn’t initially happy about, but turned out to be a blessing, as I was constantly getting up to go ask for water from the flight attendants. Finally after many films and a glass of wine, the Captain announced we had started our descent into New York. When we got on the ground I made my way through the airport, I think the adrenaline and excitement were keeping me up because for me it was essentially 2.30 am even though it was in fact only 9.30pm local time. I finally managed to stumble my way to the airtrain at JFK and onto the subway, but only after stopping a few locals and asking for help. 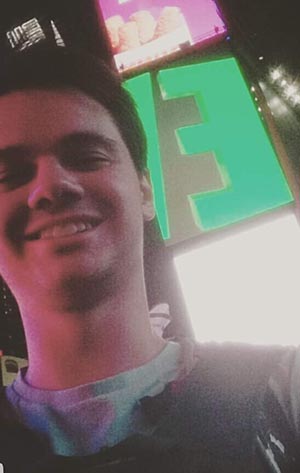 Even though it was almost 11pm local, and I was completely exhausted, I couldn’t resist making a stopover in Times Square on my way to the hostel. I stepped out of the subway station and was instantly mesmerised by all the sights, lights, colours, and sounds. I was in New York City! With my backpack on my back and my day back on my front I felt like such a tourist but I didn’t care, I was too happy to be here. However, after only a few minutes my exhaustion caught up with me and so I went back to the subway station and made my way to the hostel in the Upper West side. After checking in I, reluctantly, had a quick shower and went to sleep. I fell asleep almost instantly.

Two hours later I woke up with an incredibly dry and painful throat. I continued to wake up every two hours, drinking water to ease the throat. I woke up again at 7.30 and didn’t get back to sleep. By the time 9am rolled around I realised that any more sleep wasn’t going to be possible so I reluctantly stumbled out of bed. This was not the ideal start to my holiday. After my shower, feeling very hungry I made my way downstairs to the breakfast bar and ordered a panini. I was mightily surprised at the portion sizes as I could barely finish it despite being ravenous, and it took over an hour to drink my medium coffee. After hanging around a bit I got my stuff and made my way into the city. My first stop was Times Square, again. It seemed very different in the day time, not nearly as exciting, but still a great sight. From there I made my way through the city just walking around and exploring. I visited the Grand Central Terminal, and then made my way to Madison Square Park, and saw the flatiron building. Spotting the Chrysler and Empire State buildings along the way. I had planned to go to the top of the Rockefeller building the next day so I could get a good view of them then. I spent the rest of the afternoon exploring a bit more and by the time 6pm rolled around I thought it best to go back to the hostel. I got back and lay down on my bed to relax for an hour or so, before I knew it I was fast asleep. 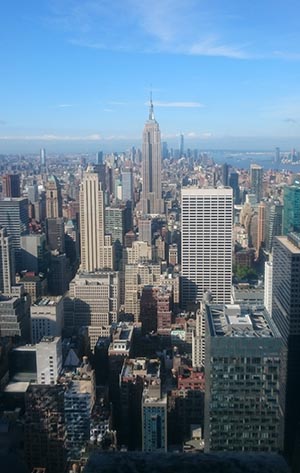 I woke up the next morning at 6am, clearly I needed the sleep! I decided to get out of bed early this morning and get up to the top of the Rockefeller Centre as early as possible to avoid the crowds. Luckily my throat was hurting a lot less this morning, but I still took my meds and hoped that it would clear up over the next few days. I got to the Rockefeller Centre just after opening at about 8.15 and made my way to the top. I stepped out onto the viewing platform and was utterly astounded! This was the view I had been dreaming of, this is the view I had been waiting to see, this was New York. I spent about an hour on the viewing platform just taking in the views, breathless. The noise from the city was rising up combining into a constant roar at the top. Finally I left the top and made my way downtown. I walked through Little Italy, which was a little disappointing for me, it was the same as the rest of New York, but people were speaking Italian. Nonetheless I carried on and made my way into Chinatown which was what I was expecting, from street markets to decorations it felt like Chinatown. I then made my way to City Hall where I got onto the Brooklyn Bridge Promenade and walked over Brooklyn Bridge, which offered amazing views of New York and of course the Bridge itself. When I got to Brooklyn I made my way down to Main Street Park, under Manhattan Bridge to get a view of Brooklyn Bridge, I had planned to explore Brooklyn on another day. I was not disappointed, the view was phenomenal with Manhattan in the background. I then mooched around a bit on the waterfront getting in more views of the bridge and Manhattan before making my way back to Manhattan by walking over Manhattan Bridge this time.

I set out the next morning to make my way over to New Jersey to go and stay with Mrs Matthews and her family in the town of Clifton. The bus ride was only about an hour or so, and it offered magnificent views of the west side of Manhattan coming out of the Lincoln Tunnel. I arrived at the house feeling slightly nervous and not sure what to expect. I was greeted by Mrs Matthews and her three sons, and before long I was feeling relaxed, they made me feel very welcome. After I had settled in, I spent the afternoon getting to know the Matthews’ before getting an early night feeling rather tired.

I woke up the next morning feeling much better. Over breakfast I met Rachel’s husband John, he was a lovely man, but we didn’t chat long as I was heading out back into Manhattan to do some more exploring. I arrived at the bus terminal in Manhattan and conveniently it was right near the northern entrance to the Highline. It was interesting walking along the highline and seeing the history of it and how it was used to transport freight up and down the west side of Manhattan. It was also a pleasant walk in and of itself, and a different way to see Manhattan. The rest of the day was fairly uneventful. I wandered over to Greenwich Village, went and saw the “Friends Apartment” and explored lower Manhattan.

The next day the Matthews’ had organised a barbeque and the weather was absolutely perfect for it. They had invited some of their friends around and we spent the day outside by the swimming pool having a nice day in the pool with good food. The friends had brought their kids over and the kids and I had a water balloon fight in the garden. This was one of the highlights of the trip, amongst others. 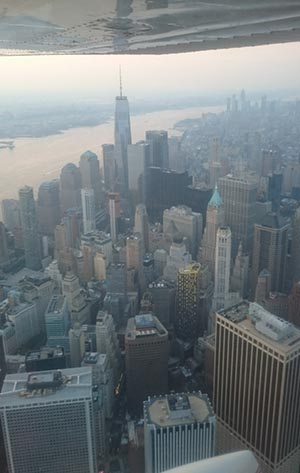 The next day was my last full day with the Matthews’. I didn’t do much in the morning but that evening we went out to dinner at an American Diner. It was a rather interesting and exciting experience for me with lots of food on offer, that I could barely finish. After dinner John was taking me for a scenic flight over Manhattan as he had his pilots licence and they owned an airplane. It was an amazing experience that offered views of Manhattan that are just out of this world, despite the fact that it was incredibly foggy. Unfortunately Trump was in New York so the airspace was highly restricted which meant that john couldn’t let me take hold of the controls. Nonetheless it was still an amazing experience.

I would like to thank John and Rachel, and their kids for the amazing time I had with them in New Jersey and for their great hospitality. They made it a great start to this holiday.

You can read the whole of Dylan’s Travel Report on PDF here.