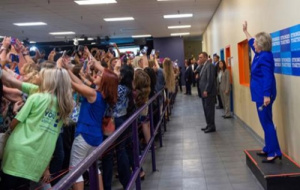 We were delighted to see Old Members and friends at the second sold-out Univ Salon, held on Thursday 23 January at 6.30pm in The Groucho Club, London.

The Salon is part of the College’s annual Univ in the Arts programme, in which we explore a specific aspect of a humanities-related issue in an interactive and informal way.

The theme “Who Owns the News?” addressed one of the most important questions facing any democratic society: what are the forces that shape the news we all consume and on the social media feeds we now access as part of our daily lives? In short, who holds the real power in today’s increasingly fragmented, fake-news obsessed, financially-perilous news industry?

We welcomed three speakers from various backgrounds. Chris Birkett (1979, PPE) spent more than thirty years as a journalist, news producer and executive with the BBC and Sky News, winning an Emmy Award in 2007 and a Royal Television Society Award in 2010. Chris has first-hand experience of the powerful and often conflicting currents sweeping across the UK news industry.

Daniel Gilbert (2004, History) is the Director of the London Public Affairs Team at Hanover, one of the UK’s leading communications consultancies, where he oversees the firm’s Brexit advisory practice. Daniel’s background is in government communications – he was previously a Special Advisor in the Department for Business, Innovation and Skills.

Fred Spring (2006, Philosophy and Russian) is a media entrepreneur turned consultant, with a broad range of experience in government, the media industry and consultancy. In 2016, while at Harvard Business School, Fred set-up The Daily PNut, an electronic newsletter on global affairs aimed at millennials, which was later sold to a San Francisco-based media publisher.

Please enjoy the audio recording of the talk and subsequent Q&A.