The Man Who Mistook His Wife for a Hat 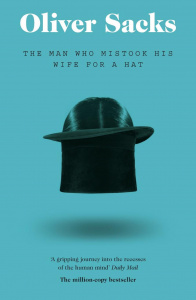 One book that particularly inspired me to study Biomedical Sciences was The Man Who Mistook His Wife for a Hat by neurologist Oliver Sacks. This is a series of short case studies of some of the most notable patients Sacks encountered during his career.

The title of the book gets its name from one of the patients, Mr P, who is suffering from visual agnosia. Visual agnosia is effectively the inability to recognise objects by sight alone. For example, if Mr P were presented with an object he would not be able to tell what it was by just looking at it. However, if he were able to touch it or it made a sound, he would immediately recognise the object. Therefore, Mr P really is unable to distinguish between his wife and a hat! For me, this was the first time that I considered that different senses are associated with different areas of the brain.

Another particularly interesting case in this book describes a Jimmie G who has Korsakoff’s syndrome and is unable to form new memories. As a result of this, he believes he is still a solider in the Second World War, as he is unable to remember anything that has happened since that time. This study provided a really interesting insight into the difference between long and short term memory and the formation of new memories.

The way that this book is written really makes you relate to each case study on a very personal level, whilst still giving a lot of detail about the clinical aspects of each case. It is a fantastic book to make you begin to think about the way in which our brains function.

Of the Social Contract

The Music of Life