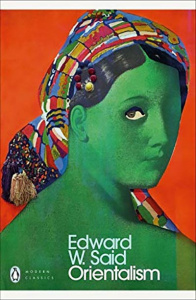 Orientalism is one of those books that dramatically shifts and engages your world view, both on a personal and political level. For my own part, I struggled with my identity as a half-Syrian woman growing up in a very ethnically homogenous city with little representation of any non-white ethnic group, let alone the very small MENA (Middle East and North African) population which exists in the U.K.. As a result of almost constant media focus on the “refugee crisis” and terrorism, my already fragmented sense of self felt even less autonomous with the misconceptions surrounding my identity seemingly already definitively constructed for me.

However, instead of becoming politically apathetic and disillusioned with both my identity and the wider political system, I resolved to learn more. Edward Said’s polemic Orientalism gave my sharp interest in the politics of post-colonial studies a new edge, shedding light on the historical precedence of the dichotomy between “barbarism” and “exoticism” which have been forced upon the East (the “Orient”).  Controversial ideas and new debates are at the heart of this book, ones that are still as relevant today as they were when it was originally published in 1978. In fact, the debates that Said presents on the nature of the West (Occident) and East (Orient) are arguably more pertinent than ever.

I believe that reading Orientalism was extremely helpful in my successful application for History and Politics, with the book representing an explicit link between how past histories can inform modern politics both implicitly and explicitly. I urge anyone interested in the nature and formation of preconceived ideas on history and politics to engage with this text and challenge their own perspectives.

A Mind for Numbers