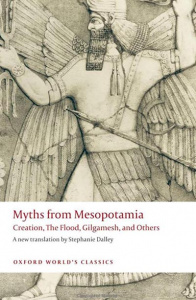 Ancient Near Eastern Studies is one of the smallest degrees at Oxford, with only 3 students at undergraduate level in my year. Explaining to people in a crowded room what I’m studying is always an interesting and occasionally frustrating experience. After I’ve explained that I’m studying ancient Mesopotamia (an area today roughly embodied by the modern country of Iraq) and its languages they then go on to ask how I could possibly have got interested in something so obscure. Well, reading Myths from Mesopotamia by Stephanie Dalley was where my interest started. I was given it as a birthday present by some relatives who knew I was interested in ancient history and I was soon gripped.

“The Epic of Gilgamesh”, probably the most famous of the myths in this anthology, is a ripping yarn, which follows the quest of Gilgamesh to achieve immortality after the death of his friend Enkidu brings home to him the fragility and impermanence of his own existence. Although the style of verse can be a little difficult to get used to, the enduring themes of the story (death, love and friendship) make it difficult to believe that you are reading a tale over 2000 years old.

“Atrahasis” is another of my favourites. It tells the story of a man who builds an ark to escape a flood sent as punishment by the gods to wipe out mankind. Sound familiar? It’s very likely, almost certain, that this story influenced the flood story in the Bible, something that I found incredibly interesting when I read this book for the first time.

Other stories in the collection offer wonderful insights into Mesopotamian religious belief and how these ancient people viewed the world around them. Although, the fact that these stories are translations, rather than retellings, can make them slightly frustrating to read (damage to the original clay tablets they were written on can lead to gaps in the text), it is thrilling to know you are reading the original words set down by a scribe thousands of years ago. I would recommend this book to anyone who is interested in ancient history, or who loves Greek and Roman mythology and wants to explore what else is out there.

A Mind for Numbers