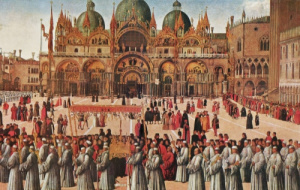 Street Life in Renaissance Italy underscores how the design and structure of public space during this transformative period were intended to exercise a certain measure of authority over its citizens, citing the impact of architecture and street layout on everyday social practices. The book demonstrates how the character of public space became increasingly determined by the habits of its residents, for whom the streets served as the backdrop of their daily activities. Highlighting major hubs such as Rome, Florence, and Bologna, as well as other lesser-known settings, Street Life in Renaissance Italy offers a new look at this remarkable era.

After studying at Univ, Professor Fabrizio Nevola studied MA (History of Architecture) and PhD (History of Art) at the Courtauld Institute of Art. He has held research fellowships at the University of Warwick, the Canadian Centre for Architecture (Montreal), the Medici Archive Project (Florence), and Harvard University’s Villa I Tatti (Florence). Professor Nevola is currently Director of the Centre for Early Modern Studies at Exeter University. He specialises in the urban, cultural and architectural history of early modern Italy. In 2008 his book, Siena: Constructing the Renaissance City was awarded the Royal Institute of British Architects, Sir Nikolaus Pevsner International Book Award for Architecture.

Professor Nevola has also been working on Hidden Cities a project that reveals the unknown history of five cities: Exeter, Deventer, Hamburg, Valencia and Trento. Last November, Hidden Florence 3D, a collaboration between the National Gallery and Professor Nevola and Dr Donal Cooper, University Senior Lecturer in Italian Renaissance Art and Director of Studies at Jesus College, was winner of App of the Year AR/3D 2020.

Street Life in Renaissance Italy is available on Amazon and Blackwell’s.

A message from The Master

Unravelling the secrets of matter

Annika Möslein is a second…