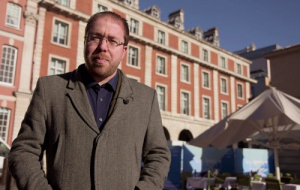 Professor Joe Moshenska, Beaverbrook and Bouverie Fellow and Praelector in English, won a competition to appear on the Talking Sopranos podcast as part of their superfan episode. Joe was one of eight superfans selected from over 10,000 entries.

The Talking Sopranos podcast is hosted by Michael Imperioli, who played Christopher Moltisanti, and Steve Schirripa, who played Bobby Baccalieri on the hit TV show. The podcast is now on its sixth season, rewatching and commenting on the TV show with special guests from across the entertainment industry.

Joe said, “I’m a big fan of the TV show The Sopranos, and over lockdown, I’ve been listening to a rewatch podcast that two of the main actors from the series have been doing. A couple of months ago, giving into peer pressure from my wife, I answered their call to enter a competition to appear on the podcast as a ‘super fan’ and be interviewed by the pair. To my surprise, I was chosen.”

Joe’s research is mostly located in the period between 1500 and 1700. His second book, published in 2019, is titled Iconoclasm as Child’s Play, and looks at a remarkable moment in the sixteenth century when holy things taken from churches during the Reformation were, instead of being smashed or burned, given to children as toys — using this practice to think about the relationship between play, religion, art and violence, in the early modern period and our own. He is also interested in finding ways to communicate his excitement about the sixteenth and seventeenth centuries to a wider audience. His book A Stain in the Blood, on the seventeenth century polymath Sir Kenelm Digby, was written for the general reader and he often appears discussing early modern topics on the radio. He was named on the BBC New Generation Thinkers in 2015. In 2017, he presented a documentary on Milton’s Paradise Lost that was broadcast on Radio 4.

You can watch the episode of Talking Sopranos on YouTube.

You can read a profile of Joe here.