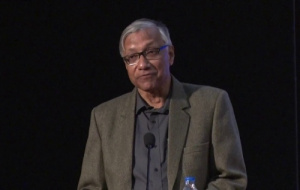 Professor Sukanta Chaudhuri (1970, English) was elected a Corresponding Fellow of the British Academy in July. Professor Chaudhuri is Professor Emeritus in the Department of English at Jadavpur University, Kolkata, India.

Professor Chaudhuri was the founding Director of the School of Cultural Texts and Records, at Jadavpur University, a pioneering centre of digital humanities in India. His chief fields of study are the English and European Renaissance, translation, textual studies and digital humanities. He has held visiting appointments at many places including All Souls College, Oxford; St John’s College, Cambridge; the School of Advanced Study, London; the University of Virginia; and Loyola University, Chicago. He is an Honorary Fellow of the Asiatic Society, Kolkata and was a member of the Executive Committee of the International Shakespeare Association (1988-2021).

His work on the English and European Renaissance, and textual studies include The Metaphysics of Text (Cambridge, 2010), The Third Arden edition of A Midsummer Night’s Dream (2017), English Renaissance Pastoral Poetry: An Anthology and Companion (Manchester, 2016-2018), The Cambridge Companion to Rabindranath Tagore (2020).

Professor Chaudhuri has translated extensively from Rabindranath Tagore, Bankim Chandra Chattopadhyay, Sarat Chandra Chattopadhyay, Sukumar Ray, Rajshekhar Bose and other classic Bengali writers, as well as many modern Bengali poets. He has also translated the complete limericks of Edward Lear into Bengali, and selections from the Notebooks of Leonardo da Vinci from Italian into Bengali.