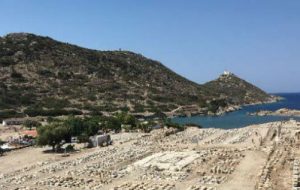 My trip can broadly be split up into three sections; in approximate chronological order: the West coast, starting in Dalaman and visiting the ‘seven Churches’ who received letters in the book of Revelation; Istanbul and Cappadocia. I shall summarise my experience at each of these three sections in what follows.

At this stage I’d like to express my extreme gratitude to the Roger Short memorial fund and its contributors for allowing me to discover more about Turkey, a country I have always considered of huge historical interest but I now also know to possess incredible natural beauty and a wonderful culture. Without the generosity of the fund, this trip and all I learnt from it would not have been possible.

West Coast and the Seven Churches

3-8 September: West coast – I began my adventure on the 3rd of September; taking a flight from Heathrow to Dalaman followed by a lift to Psychos. On 4 of September I had my first dose of Turkish history with a tour of Knidos.

6 September marked the start of my visiting the ‘seven Churches’ of the book of revelation. It should be noted that the term ‘Church’ originally referred to the gathering of people, rather than any building that one can visit today. However, there remain ruins of Church buildings at each of the Seven Churches, which were constructed between the 4th and 11th centuries.

I began with a visit to Ephesus and the surrounding area. In the morning I visited St John’s basilica; a Byzantine Church ruin marking his burial place and a house which some claim to have been the house of Mary the mother of Jesus.

In the afternoon, I visited the marble white Ancient City of Ephesus. It was fascinating to see such a well preserved Ancient city and really brought the classical world to life. I found the influence of various religions on the architecture of the city particularly interesting.

In the evening, I stayed in Pamukkale, the location of the grave of Philip, along with a stunningly beautiful landscape formed by sodium residue.

7 September – On the 7th I continued on the tour of the seven Churches of the book of revelation, starting with the ancient Philadelphia Church at Alasehir, the youngest of the Seven Churches, to see the standing remains of an early church and the city walls. 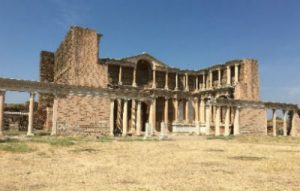 After lunch, I visited the site of Sardis – the capital of the ancient kingdom of Lydia. Walk the Royal Avenue and see the site of the Church of Sardis built on the foundations of the Temple of Artemis.

To top the day off I visited another of the seven Churches; the Church of ancient Thyatira (Alasehir), set in an ancient commercial town with strong ties to Troy and Sardis.

8 September – I started the day of the 8th September by visiting Pergamon (Bergama), about whose church St. John had written that ‘Satan’s throne is sited’. As with most of the Churches, seeing this Church in the flesh helped me to understand more deeply some of the allusions made in these letters.

After this, I visited the ancient city of Troy. It was fascinating to discover more of the history of this, one of the most famous cities of the ancient world. Many ruins from the different eras in the city’s history remained remarkably well intact.

Perhaps the most moving and memorable part of the day for me was visiting a memorial in Gallipoli to the many fallen soldiers, including my great-great uncle, Harry Coops. 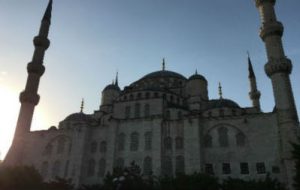 Having finished my tour of the seven Churches, I spent a few days in Istanbul. Some of the highlights of my time there include time spent with the Anglican chaplain for Istanbul, who kindly took me for lunch one day and visiting some of the many sites of historical interest. In particular the Aya Sofya and the Blue Mosque.

It was very interesting for me to hear more about Istanbul’s religious history. Istanbul (previously called Byzantium and Constantinople) was one of the cultural capitals of the ancient world and was highly sought after by competing religious and political factions.

For a time, Istanbul (then Constantinople) was one of the centres of early Christianity; hosting many of the most significant events in the early Church, including the famous ecumenical council of 381, in which the decrees of Nicaea were affirmed and extended.

In the muslim conquest of 1453, the city was taken over by islamists and many of the historic places of worship were repurposed for use within Islamic worship. This can be seen in many of the historic sites I visited in Istanbul, in which former Churches and Cathedrals, some of which still have Christian paintings, have been transformed to house Islamic symbols and worship.

The highlight of my time in Turkey has got to be the time spent exploring Cappadocia.

The insight guide to Turkey says of Cappadocia “Many visitors only make a brief excursion to the cones and rock Churches of Goreme, and spend an hour or two in Zelve or Ihlara. That’s a pity because Cappadocia is best explored in a leisurely fashion on foot, by car or on a bicycle.” I couldn’t agree with this sentiment more; the leisurely hours spent exploring the beautiful surroundings of Cappadocia were every bit as enjoyable and informative as the hustle and bustle of the guided tours there.

Some of the highlights of my time in Cappadocia included visiting the many cave Churches and cave cities constructed by early Christians, both with tour guides and roming more freely on my own, enjoying the local food and atmosphere and trekking in the stunning mountains. 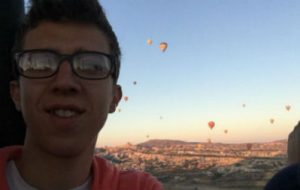 However, the most memorable experience in Cappadocia was the early morning hot air balloon trip. The views of the whole region and of the sunrise were breathtaking.

Time spent in Cappadocia was probably the most interesting from an academic perspective as well. With its multiple caves and other hiding places, Cappadocia became something of a refuge for Christians fleeing persecution from the 4th Century onwards and exploring these Church buildings brought the experience of early Christians to life in a new way.

It was an immense privilege to travel in Turkey. I gained not only an appreciation of the context of much Early Church History but also a greater understanding of the thriving Turkish culture. I am therefore hugely grateful to the Roger Short memorial fund for giving me such an incredible opportunity.