Secretary General of the UN podcast 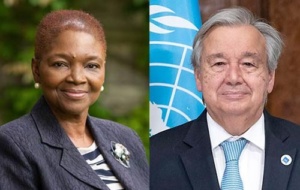 On Wednesday 26 October, we held the latest instalment of Global Conversations from Univ with Baroness Amos in conversation with António Guterres, Secretary-General of the United Nations, followed by a discussion with Professor Ngaire Woods, Univ Senior Research Fellow, founding Dean of the Blavatnik School of Government, and Professor Dapo Akande, Professor of Public International Law at the Blavatnik School of Government and Co-Director of the Oxford Institute for Ethics, Law and Armed Conflict (ELAC).

Baroness Amos
The Right Honourable the Baroness Amos LG CH PC commenced her tenure as Master of University College Oxford in September 2020. Prior to taking up the Mastership, Baroness Amos was Director of SOAS University of London. Before that, she served as Undersecretary General for Humanitarian Affairs and Emergency Relief Coordinator at the UN from 2010 to 2015, and held senior roles in government and the public sector.

His Excellency António Guterres GCC GCL, the ninth Secretary-General of the United Nations, took office on 1 January 2017.
Having witnessed the suffering of the most vulnerable people on earth, from refugee camps to war zones, the Secretary-General has centred his efforts on ensuring human dignity for all. In a period of unprecedented global challenges, he has drawn on his commitment to the UN Charter to mobilise people and launch action to respond to the COVID-19 pandemic, address the climate emergency, advance gender equality, and achieve ambitious 21st century reforms to enhance the Organisation’s vital efforts to secure peace, sustainable development, human rights and humanitarian aid.

Prior to his appointment as Secretary-General, Mr. Guterres served as United Nations High Commissioner for Refugees from June 2005 to December 2015, heading one of the world’s foremost humanitarian organisations during some of the most serious displacement crises in decades. The conflicts in Syria and Iraq, and the crises in South Sudan, the Central African Republic and Yemen, led to a huge rise in UNHCR’s activities as the number of people displaced by conflict and persecution rose from 38 million in 2005 to over 60 million in 2015.

Professor Ngaire Woods
Professor Ngaire Woods, Univ Senior Research Fellow, is the founding Dean of the Blavatnik School of Government and Professor of Global Economic Governance at Oxford University. Her research focuses on how to enhance the governance of organisations, the challenges of globalisation, global development, and the role of international institutions and global economic governance. Professor Woods founded the Global Economic Governance Programme at Oxford University, and co-founded (with Robert O. Keohane) the Oxford-Princeton Global Leaders Fellowship programme. She led the creation of the Blavatnik School of Government.

Professor Dapo Akande
Professor Dapo Akande is Professor of Public International Law at the Blavatnik School of Government, a Fellow of Exeter College, Oxford and Co-Director of the Oxford Institute for Ethics, Law and Armed Conflict (ELAC). From January 2023, he will be a Member of the United Nations International Law Commission. Before moving to the Blavatnik School, he was Professor of Public International Law at Oxford Law Faculty. He has held visiting professorships in the US, Europe and Australia including at Yale Law School and as the 2015 Sir Ninian Stephen Visiting Scholar at the University of Melbourne Law School’s Asia-Pacific Centre for Military Law.

Over the past few months…