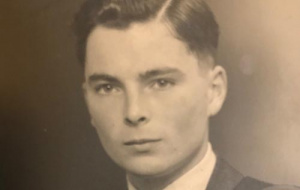 Following the sad news of the death of Dr Brian Loughman, Emeritus Fellow, who died on 9 October aged 94, we are grateful to his friend and colleague, Dr David Bell, Emeritus Fellow of Geology, for this moving tribute.

A further tribute, from Jamie Hayward (1978, Agriculture and Forest Science), can be read here.

Others will speak with more authority than I have about Brian’s scientific achievements some of which I do know were considerable. I will say a little about our friendship. 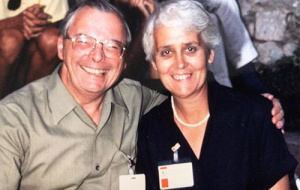 Brian and his wife Jean at a conference in the 1980s

I came to know Brian Loughman some years before either of us had much to do with Univ. Starting in 1965 at the request of Kenneth Sandford who was Reader in Geology but not a Fellow of Univ, I began tutoring some of the College’s geologists. Brian was, I think, doing the same for any botanists. We met occasionally, walking along Parks Road and once when he came into my Department, possibly for a Sub-Faculty meeting. In those days Geology and Mineralogy (as the Department was then called) was in the Faculty of Biological Sciences which included Zoology, Botany, Forestry, Soil Science and Plant Science. Lawrence Wager, Professorial Fellow at Univ, preferred it that way, shrewdly judging that such a home ensured Geology remained a moderately sized fish in a sizeable pool and not a minnow among the much larger Physical Sciences. 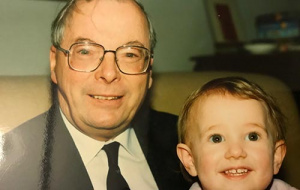 With his granddaughter Morwenna in 1990

Brian came to Oxford and I came back in 1961: he from Cambridge and I from service in the Solomon Islands. He was a University Demonstrator (later University Lecturer) and I was a Departmental Demonstrator, an inferior form of scientific life at the beck and call of the Head of Department. I drew level with Brian when I too became University Lecturer in Petrology in 1967. In those days one could have this fairly senior University post (appointed to retirement at 67) but not be a Fellow of a college. In fact Oxford had no Tutorial Fellow in Geology until Ron (now Lord) Oxburgh was elected to such a Fellowship by St Edmund Hall in, I think, 1965. The Franks Report changed all that by establishing an ‘Entitlement List’ of such people as Brian and me. Most colleges opted to elect two Fellows from the list to clear up the backlog and Univ selected the two of us. The significant point was that we were both to be non-stipendiary but for some reason I was also to be Supernumerary. Such is the way of Oxford Colleges.

Thereby hangs a tale. I think that Brian had something of Odysseus, a man of many wiles, about him, although in Brian’s case the wiles were always amusingly or helpfully deployed and our election demonstrated this. The protocol for election of a Fellow of the College involves requiring the candidate to attend a Governing Body meeting and wait outside the door of the Alington Room until summoned to enter by the Junior Fellow present (at least, that is what it used to be). In our case, when the door opened Brian pushed me in ahead of himself. I was thus the first of us to be elected and, although he was about ten years older than me, I became his senior in the Fellowship list. Only later did it dawn on me as to why he did this. It meant that whenever the two of us were present for dinner at High Table I had to hear and respond to the Grace and take charge of placing guests at Dessert. The wily Loughman knew this would happen: I did not.
We were elected initially as Supernumerary Fellows. In 1971 I was elected Sollas Fellow in Geology and in 1978 Brian elected Hammerson Fellow in Plant Sciences. 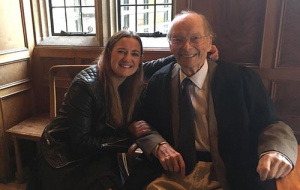 There was an absurd rumour circulating at one time that Brian was not Welsh and actually haled from Herefordshire. Given his service in the Royal Welch Fusiliers (23rd Foot) and his passion for rugby, the claim was clearly spurious. He was born near Newport and played rugby for its team and for Cardiff (and later in Cambridge) at stand-off half, the second receiver, a position for a wily passer whose role is vital in directing the play. You have to be tough and nimble too and Brian had the right physique. When his playing days were over, he remained true to the game and could always be found on the touchline when the College played and at Twickenham hoping to watch Wales beat England or the Blues match where, if you were his guest, you were regaled with extravagant hospitality, such were his status and reputation there too. With a Cambridge doctorate and an Oxford fellowship he reasoned that whichever side won at Twickenham it was his team.

Rugby was not his only sport. His wiles extended to crafty spin bowling and close-in fielding. Matches against visiting Old Members or undergraduate sides saw his talents on show along with the likes of Dan Cunningham (a very stylish bat), John Finnis, John Wheater and another wily Welsh player, Chris Pelling. 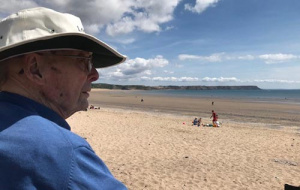 Brian’s belief in the importance of sport had some role during his term as Dean of Graduates. Blues particularly in rowing and rugby coloured the College’s reputation as much as the academic achievements of the Weir Common Room which were then, as they are now, considerable.

From the beginning we were both Senior Members of the College’s Music Society now returning to its former glory under the leadership of Director Giles Underwood. We both heard Yehudi Menuhin, Gidon Kremer, Cyril Smith and George Malcolm play and Elisabeth Schwartzkopf sing in the Hall and have enjoyed the remarkable performances of Junior members no less. Very rarely, less so as with the pianist of whom Brian remarked, ‘not a single wrong note and none that sounded like Chopin’.

He was Dean of Graduates longer than anyone else in recent times and for much of his tenure I was the Dean. We formed a close working relationship along with the Head Porter and the Chaplain, Bill Sykes. Head Porters and Chaplains deal with many students’ problems discreetly and with no need to inform a Dean but not infrequently decanal intervention is necessary and sometimes has to be joint. The less disturbing involve need for financial assistance and Brian and I commonly consulted together as to the best way in which to call on the College’s various funds. More troubling are disciplinary matters and of these there were several we felt we had to act together. One concerned a student who complained that he had received death threats from fellow students and called in the police. The death threats were no more than clumsy jokes but the matter took a long time to sort out. Another much more serious case we jointly decided had to be referred to much higher, in fact the highest, University authority. 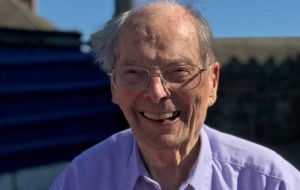 Brian’s shrewdness and common sense always showed through in such emergencies. And so in another, happier if quirky case: that of the kestrel. A scout came to me one day complaining that on entering the room of Mr X she had been attacked by a ferocious bird. Mr X was one of Brian’s First-Year pupils who had brought his kestrel to Oxford for company. There were rules against keeping dogs in the College but apparently none against birds, caged or not. After consultation with Brian I convinced the scout that the bird had not been attacking her but only trying to escape and reluctantly she accepted the argument. I then put the case to the student that his kestrel’s natural environment was the Parks or the Meadows and not a fusty old room in Univ. He took the point. 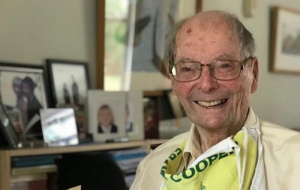 Brian’s last official rôle in service of the College—for there were many other less formal ways in which he served, especially with Old Members, Pomona and the Soros Foundation– was as Dean of Degrees and as it happened, I followed him in this. He gave me a thick pile of file cards on each of which were the hand-written Latin words used to address the Vice-Chancellor and Proctors at presentation of supplicants for every degree from DD to BA Fine Art, with number and gender variants. Most of the cards were so well-thumbed as to be illegible but I appreciated the gesture. I thought it wise to attend a ceremony and watch him perform so as to see how things were done. Total quietness reigned in the Sheldonian as he spoke: not, I think, because the assembly craved to hear the arcane Latin plea but because he spoke so softly as to be virtually inaudible. Some other Deans perhaps should have done likewise because their Latin pronunciation was, unlike his, execrable.

He continued to live in the house in Stanton St John that he and Jean had built when they came to Oxford in 1961. At the rear of the house is a long expanse of lawn and a hedge at the far end separating it from fields. In the distance you can see the rise where Brill stands. Brian used to say he must cut back the hedge a little because its branches were beginning to obstruct his view: still the practical plant scientist.

With additional thanks to Brian’s family for providing such wonderful photographs of him.

How saddened I was to hear of Brian’s death today. He had a huge influence on my life being an endless source of support during my time in Univ from 1978 – 1981 reading Agricultural and Forest Science. I regret to say I probably caused Brian endless headaches ranging from mildly rebuking me for coming up with my Kestrel in tow, to bailing me out of Cowley Police Station at 3am the night before my finals!!

As was Brian’s way he gently smoothed troubled waters merely saying “he’d seen worse” – I am forever in debt to him. He made life fun and whilst I always knew I was intellectually inferior he was so patient at our weekly tutorials. Whilst I did not put Brian’s tutelage to good purpose – i did 34 years in the Scots Guards – I hope my last military mission would have pleased him. I  spent my last 2 years of Service working with the Wildlife Services of East Africa in assisting combatting the Illegal Wildlife Trade….someting I think Brian would have been pleased he had a hand in informing my enthusiasm for – sadly I never shared it with him.

Brian – thank you for being a tower of strength, patience and support for regrettably a very errant Undergraduate.