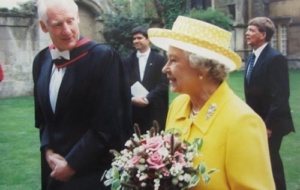 The College joins with the nation in recording with deep regret the death of Her Majesty Queen Elizabeth II on 8 September 2022. The College has particular reason to mourn the passing of Queen Elizabeth because throughout her long reign she has been the College’s Visitor, which is to say our official ceremonial and statutory overseer.

The Crown has been Visitor of Univ since 1727, although the monarch’s duties have always been performed by an intermediary. For many years this was the Lord Chancellor, but, following the effective abolition of this post, the duties were passed to the High Steward of the University in 2007.

In recent years the Queen enjoyed another link with this College in that our last Master but one, Lord Butler of Brockwell and our present Master, Baroness Valerie Amos, were both appointed members of the Order of the Garter when they were at this College. Membership of the Garter is one of the few honours which is in the personal gift of the monarch.

The College sends its deep condolences to His Majesty King Charles III, who will now be our new Visitor, and to the rest of the Royal Family. 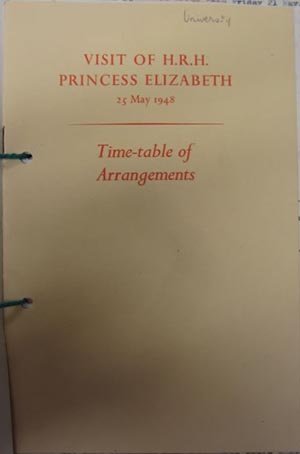 from UC:CO1/5/A3/4 – An official timetable of arrangements for the Queen’s visit

We leave it to others to consider the Queen’s long and remarkable life of devoted service to the country, but instead at this time we look back on the two special occasions when she visited this College, in 1948 and in 1999.

On 25 May 1948, Princess Elizabeth, Duchess of Edinburgh, visited Oxford to be awarded a Doctorate in Law. We know something of the itinerary of the day from this official timetable of arrangements for her visit (image left).

It shows that, during her day in Oxford, the Princess visited Magdalen, Christ Church, Oriel and Brasenose, where she had lunch. After lunch took place the ceremony in the Sheldonian, after which the Princess was shown around New College and St. Hilda’s, after which she was taken to Univ, where the Oxford University Dramatic Society (OUDS) performed in Radcliffe Quad a special theatrical spectacle in her honour. This was The Masque of Hope, a newly composed piece, written in the manner of 17th century masques, by Nevill Coghill, Fellow in English at Exeter College. Here is the cover of the programme, and a list of the characters:

A BBC newsreel of her visit survives (the section on Oxford starts at about 2 minutes 50 seconds) and may be seen here.

The Princess may be seen being welcomed by our then Master, John Wild, and his wife Margaret, and extracts from the Masque are shown, including cameo appearances from such characters as “Black Market”, “Pestilence”, St. George or Clio, Muse of History.

As the Princess left Univ, she was introduced to Fred Bickerton, our then Head Porter, who had worked for the College since 1897 (photo below, left) and (below right) she is seen descending the steps of Radcliffe Quad to enter her car.

These photographs come from one of the scrapbooks of Gwynne Ovenstone, who had started to work for the College in only the previous year.

Even after this performance, the Princess had more engagements to perform, for she visited the Ashmolean Museum and St. John’s College. It was a gruelling schedule, not least when one remembers that she was by now expecting her first child. Years later, when visiting Magdalen College in 2008, the Queen remembered with a sigh just how much Latin was spoken at her that day!

We had to wait 51 years almost to the day, until 21 May 1999, when the Princess, by now, of course, Queen Elizabeth II, made a second visit to Univ, this time accompanied by the Duke of Edinburgh, our senior Honorary Fellow. This visit was a highlight of the celebrations of our 750th anniversary, and back in 2019 was made the subject of a Univ Treasure.

It will be seen there that the Queen remembered the performance of The Masque of Hope and “Black Market” very clearly.

For now, therefore, we offer a selection of photographs of Her Majesty meeting with and talking to members of the College.

Few can now remember that visit of 1948, but many will remember the Queen’s second visit to Univ as a most special day.

Again, the College sends its deep condolences to the Royal Family.