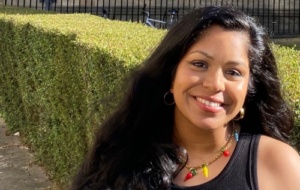 Nishta is in her third year studying Chinese at Univ. Outside of her academic studies, she is President of the Oxford University Media Society (OUMS).

How do you think you have changed since walking through Univ’s doors for the first time?
When I first came to Univ I thought of myself as a (nearly!) fully formed adult, but I have grown so much as a person since starting at Univ. Not only have I had the opportunity to meet so many interesting people from such diverse backgrounds, but I have also developed a whole new way of thinking and learning which I don’t think I could have experienced anywhere else. During my time at Univ, I have learnt things I never knew about myself, and have formed a much stronger sense of self.

Has anything surprised you about Oxford?
One thing I have found pleasantly surprising about Oxford is how easy it is to become a part of a society. Societies are integral to having a varied social life, as you can meet students of all ages from a variety of colleges. Before coming to Oxford, I thought that the Societies would be quite exclusive, but in my experience, they are easily accessible and have been a great way to meet new people. There really is a society for everyone (even for those with the most esoteric interests!) so I would definitely recommend having a good look at what the University can offer.

How did you get involved with OUMS?
In my second year, I was thinking of pursuing a career in broadcast journalism after university. I wanted to get some experience in the media industry, so I looked at what the Oxford societies offered. Along with the usual journalism Societies, such as Cherwell and OxStu, I came across OUMS. I applied for the Head of Events role, and really enjoyed it, so I decided to apply for the President position. Whilst it’s a relatively young society (formed in 2018), we’ve had some great speakers such as Nick Robinson and Jameela Jamil, and I’m even interviewing Stephen King, the writer of Peaky Blinders, next week. It’s definitely the hidden gem of Oxford societies!

What have been the best parts and/or the challenges so far of being president/part of OUMS?
The best part of being the President of OUMS is the opportunity to meet the most influential individuals in the media industry. As President, it is a massive privilege to interview speakers our audience wants to hear from, as well as having the freedom to structure the interview however I think is most suitable.

What do you do outside your studies?
I enjoy cooking, especially Greek food, and watching Middle Eastern films.

You can find out more about OUMS here.