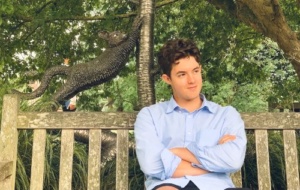 Max is in his second year studying PPE at Univ and is VP/Affairs and Sports Rep for the JCR. In this profile, he discusses choosing a college, his favourite part of Univ and enjoying the beauty of Oxford.

Why did you choose to apply to Univ/for PPE?
When I applied to Oxford, I didn’t really understand the college system at all. I had no idea what to look for in a college and, during Covid, no experience of what colleges were like. Also, I was worried about becoming too invested in choosing a college based on what it would be like to live there while I was primarily concerned with getting in in the first place, it seemed almost presumptuous at the time to be thinking about whether or not my room would have a mini fridge. All of this is really an excuse for the fact that I pretty much chose Univ because of its name, I assumed that a college called “University” must be one of the good ones, and it turns out – luckily – that I was right.

Thankfully, I gave my choice of degree considerably more thought, although having been somewhat obsessed with the news and current affairs since my early teens when I discovered PPE in year 12 my decision became a no-brainer. To me, PPE involves everything that has most interested me academically for as long as I’ve had the choice of which subjects to study. I have also always wanted to keep my studies as broad as possible, so the chance to study three wide-ranging subjects in one degree was perfect. 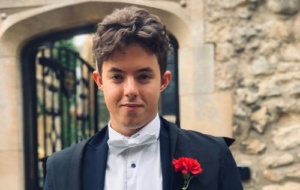 How do you think you have changed since walking through Univ’s doors for the first time?
I was a nervous wreck when I walked through Univ’s doors for the first time, convinced like Harry Potter waiting for the sorting hat that there would be some revelation of a terrible mix-up and that I’d be sent back home – so I’d like to think that I’ve become more at home and less overawed by Oxford than I was then, and like many people, the “magic” of the University has definitely worn off over time, as events and places that seemed mysterious and exciting to begin with become normal parts of your day as a student. However, I often still find myself gazing at the many beautiful parts of the city and of Univ, and I hope to continue holding on to parts of that excitement for the rest of my time here.

What’s your favourite part of Univ?
My favourite part of Univ is the New Library, more specifically its group study rooms. These are small rooms set apart from the main reading room of Univ’s second library where you can work together with other people and don’t have to remain silent. Studying PPE, which at Univ has one of the largest cohorts per year and where, at least in first year, everyone studies the same content, I have found these rooms both incredibly useful academically and also the location of some of my best moments of my first year. Many of my friends also study PPE, so we ended up spending many hours during term and before exams revising here, meaning the New Library study rooms became something like a second home. They’re excellent. 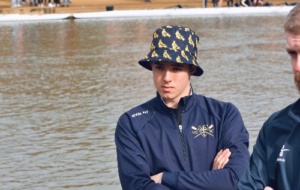 Has anything surprised you about Oxford/Univ/your course?
One of the biggest surprises for me was how much my first term took out of me, both in terms of simple tiredness and – no doubt as a result – in physical health. There are many different demands placed on a student in their first term which become amplified by the fact that everything is new, exciting and scary. I was attempting to balance studies with sport and socialising and eventually, things must have become too much for my body – I ended up spending the last few weeks of Michaelmas and the entirety of the Christmas vacation as ill as I have ever been in my life, only recovering from pleurisy and several chest infections after the start of the next term. I have heard similar experiences from older students but, despite warnings about freshers’ flu (which is also horrific), I think this is something that is rarely broadcast to incoming students.

Do you have any advice for freshers and/or prospective students?
In addition to looking after your body, my main piece of advice would be to make sure that you take advantage of the world-class education that is being offered to you from the beginning. It is incredibly easy in the whirlwind of Freshers’ Week and your first term to lose track of why you wanted to come to university in the first place, and you will absolutely thank yourself further down the line for being attentive and willing to learn from the start. There is, of course, a balance to be struck but I think this is definitely worth bearing in mind!

Why did you run for VP/Affairs? What would you like to achieve and/or what would you like students to know about what the VP/Affairs can do for them?
I ran for VP/Affairs mainly because I have taken an interest in the JCR’s function from the start of my time at Univ and believed I could contribute to running it effectively this year. We are lucky that Oxford colleges give their student bodies a relatively large amount of power and funding to govern themselves, and I want to ensure that Univ students can rely on their JCR to do this well. I am also the JCR sports rep and as VP/Affairs will be responsible for issues for student societies at Univ, so I’ll be happy to help out any students with society or sports club-related questions. More broadly, I am a member of the JCR’s three-person executive committee, so anyone who has concerns about the way in which the JCR is being run is more than welcome to get in touch!

What do you do outside your studies?
Outside my studies, I get involved with Univ’s Boat Club, and I really enjoyed rowing in our second men’s boat at both Torpids and Summer Eights last year. As a long-time cyclist I am a member of the University Cycling Club, occasionally racing my bike when I’m fit enough and not rowing. I also enjoy attending debates at the University Labour Club, challenging myself to contribute to political discussions as well as contributing to Look Left, their termly publication.