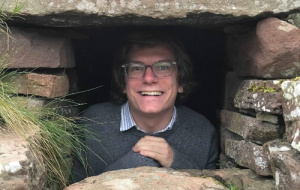 James Miller (2020, DPhil History) is co-funded by an OOC AHRC-University College Scholarship and the Clarendon Fund. He previously studied for his BA and MPhil in the department of Anglo-Saxon, Norse and Celtic at the University of Cambridge.

Why did you decide to do a DPhil in History?
Primarily, because I am curious and because the DPhil gives me the opportunity to pull apart a topic which interests me in detail. When a child I remember playing at being an archaeologist by excavating a friend’s parents’ flower beds in search of a Roman city (no treasure, just broken flowerpots) and that interest in the past has never really left me. In particular, the Early Middle Ages intrigue me due to disparity in how we often know so little but have occasional glimpses of intense detail. My favourite example of this is that we don’t know where or when Alcuin was born but from one of his surviving letters we know that he spent an afternoon in the baths with the emperor Charlemagne explaining the meaning of the 153 fish caught by the apostles in the Gospel of John. 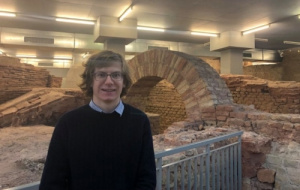 specialist subject pitch!
Monks who run away from Vikings! In the 900s Brittany is especially badly affected by Viking raids and as a result many monastic groups decide to pack up shop and leave for Northern France and Southern England. I am interested in what happens to these monks who have been driven into exile and the relics of the saints which they carry with them. How are Breton saints incorporated into religious life in new monasteries? What connections do they keep with Brittany? And, in the broadest of terms, how did people and ideas circulate in the Middle Ages?

Do you think you’ve changed since you started at Univ?
I have definitely grown academically, which was one of main reasons why I wanted to come to Oxford to do a DPhil! I have also learnt a lot in the last year about resilience and how to pick myself up and carry on after something in my research hasn’t gone as I would have liked.

How has coronavirus affected your work and life?
Fortunately, coronavirus hasn’t affected my research too much and the Bodleian have been wonderful with online resources and Scan and Deliver, though I have missed the opportunity to chat with others about academic topics after seminars. However, everything being online has made it much easier to pop over to (virtual) Paris or Princeton for a seminar!

I think the pandemic has also made me appreciate the joy of little things in life more, such as the pleasure of walks round Christ Church Meadows to see the ducks and of baking and cooking. 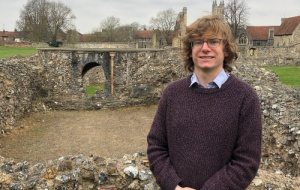 Have you experienced any challenges that you’re happy to share here? If so, how did you cope with them?
One of the biggest challenges which I have recently faced has been moving to Oxford in the midst of a pandemic. It was pretty daunting starting at a new university alongside all the other worries which this year has brought, but despite some initial apprehension everyone has been really welcoming. Both Univ and the Clarendon Trust have done a very thorough job of running online events and helping me to feel at home in Oxford even in these unusual circumstances.