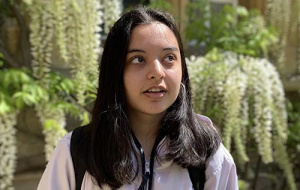 Heba is President of Univ JCR and is in her second year studying Law. In this profile, she speaks about nearly studying Medicine, what she has achieved as JCR President and coming out of her shell at university.

How did you decide on doing a Law degree considering that it is rarely taught in schools?
I actually had an interesting journey to picking Law as what I wanted to study. My original plan was to apply for Medicine. I picked science A Levels and I would tell everyone who asked that I wanted to be doctor when I grew up. Then, when I actually started researching it properly, I realised that medicine wasn’t going to give me what I wanted out of a degree nor out of my career. I ruled it out. This did leave me feeling a bit lost because Medicine was the only future I had ever thought about. In my panic, I started to look into Maths-heavy degrees instead. In fact, for a significant period I was pretty sure I wanted to be an actuary.

Law was a subject I hadn’t seriously considered because I didn’t think I had the right A Levels for it. It was also a subject I knew nothing about, so I didn’t think I’d be good at it anyhow. When I found out that essay writing A Levels weren’t actually required, I started to think about it a bit more seriously, but my lack of exposure to the subject was still a big hurdle in making the decision.

I then stumbled upon the Cambridge Sixth Form Law Conference. It was a four-day course of taster lectures on various modules that you take in a law degree. I was a little unsure about going, the main reason that I applied is because there weren’t any application questions to answer – all you had to do was fill out your details!

I had an amazing time there and I could really see myself doing it full-time. The conference gave me a glimpse into what it would be like to be a law student and from that small insight, I made the jump and chose to study Law. 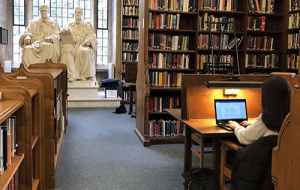 Heba working in the Old Library in College

Why did you choose Oxford? How did you come to choose Univ?
Going on a conference in Cambridge originally had me set on applying there. When I visited Oxford on an Open Day, I realised that I much preferred this city. Admittedly I was fairly unsure at the time if I would be applying to Oxford or Cambridge. However, I did know that if I was to apply to one, I would definitely pick Oxford.

I applied to Univ mainly as a result of my experience of it on the Open Day. A friend of mine visited Univ the day before me and talked about how much she liked the College and how friendly the student was who showed her around. When I got off the bus from the Park and Ride the day after, I was already looking forward to seeing Univ.

I liked that it was central. The fact that there was one set price for rent also stuck with me. I really appreciated the fact that money didn’t play a part in what room you ended up in. The fact that there is a large cohort of law students was also important to me because I wanted to maximise my chances at making friends! All colleges claim to be friendly, but at Univ, I actually felt this to be true. After my visit, I had made up my mind about where to apply.

Do you think you have changed since walking through Univ’s doors as a fresher?
I think my confidence has changed massively. Before coming to Univ, I was fairly introverted. That shyness definitely spilled over into Michaelmas of my first year. A few of my friends will recall that in Welcome Week, I would always try to get back to my room as soon as I could after an event or workshop had finished. In fairness, this would have happened no matter what university I ended up at. I just didn’t enjoy being taken so far out of my comfort zone and, at least initially, I found that interacting with strangers constantly is quite difficult and emotionally tiring.

Things changed quite quickly for me. I actually clicked with the collegiate system fairly well and I really enjoyed being acquainted with my entire year. Having a shared study in my first year really helped me to come out of my shell. I had a friend as soon as I arrived, and I got to be friends with all of her friends too. I think a lot of aspects of college life are set up to ensure everyone mixes with one another. For example, the way people sit in Hall means that you will often end up sitting next to or near someone you’ve never spoken to before. Next thing you know, you’ve made a new friendship.

I think the tutorial system also helped shape who I am now. Engaging directly and frequently with an expert on your subject can be one of the scariest things in the world. It can also be incredibly fun once you relax into it and realise that, your tutors are really just there to help and to give you the opportunity to have an intellectually stimulating conversation on a particular topic. Getting over that initial terror is so vital to making the most of a tutorial. I think the same can apply to life generally; getting over your fears in most social situations is a very important step in making the most out them. 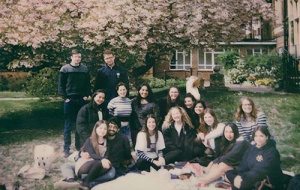 What inspired you to run as JCR President? How have you found it?
As I got more confident at Univ, the thought of running for the JCR President crossed my mind a few times, but I was far from seriously considering it. I had a few ideas for the JCR and I did imagine that I would really enjoy taking on the leadership role. Although I was a lot more comfortable than when I first arrived, I was still unsure about whether I was bold enough to run for the President of the JCR Committee. I was also unsure about whether I should have been inviting the extra workload onto myself. So when hustings started to approach, I remained on the fence about it.

Eventually, after a bit of cajoling from friends, I realised that I cared a lot about the ideas I had and I would have really regretted not going for the role. So far, it’s been amazing and I have had a fantastic year as JCR President. I am also glad to report that my concerns about the workload were misplaced. Staying organised and on top of things has been easier than I imagined it would be and it helps that I have so much fun in the role. It hardly feels like work when you enjoy doing it so much!

What are you most proud of achieving as JCR President so far?
It would be difficult to say what I am most proud of achieving. One of the biggest projects I undertook was the distribution of stash for the students of the College. This was second only to the organisation of Welcome Week which I really enjoyed because it was such a privilege be able to help the freshers transition into life at Univ. These projects were both organisational “mountains” of sorts, but I made sure that I had a lot of help so that it all ran smoothly.

As it happens, I think I feel prouder of the smaller changes that I made. I introduced blind voting into JCR meetings for example, so people didn’t have to worry about peer pressure when voting on motions and in elections. I organised a “paired-subject dinner” in Welcome Week to try and break down any divide there might have been between those studying sciences and those studying humanities. I also worked with the committee to create a poster that explained the layout of the JCR committee positions in order to make the whole organisation a little less alien for those who weren’t familiar with it. These achievements are smaller in scale, but bigger in impact (at least in my opinion!). I am most proud of them because they work towards maintaining the welcoming and inclusive atmosphere that we foster here at Univ. 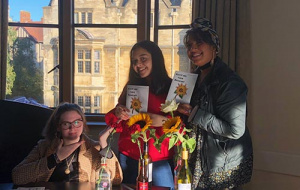 The launch of “Roots and Their Branches”, Univ’s liberation magazine

How do you feel about the celebration of 40 years of women at Univ? How far do we have left to go?
I didn’t know a lot about Oxford’s history before I came, all I knew was that the university was very old. I once read about the claim that teaching at Oxford predates the start of the Aztec Empire. To then be told that it has only been 40 years since women were admitted to Univ was shocking. The thought that women weren’t admitted from the beginning was a thought that (naively) hadn’t actually occurred to me. Having only admitted women for 40 years, we make up an incredibly tiny slice of Univ’s history. The effect of this is magnified by the fact the Oxford is an institution that prides itself on long standing traditions and its rich, but almost exclusively male, history.

Having said that, college culture can change so rapidly, especially in the JCR. No one person remains a member of the JCR for more than four years of their time here, so there is very little institutional memory among the students. Women thrive here and are an important part of the undergraduate community. As a result, a lot of the time it is very easy to forget that this was a place built for men.

Nonetheless, a few anachronisms from our male-dominated past still linger. For example, the portraits in hall are a constant reminder of our origin. The contrast between the diverse student body sat below the remarkably narrow range of faces above us is a nice reminder of how far we have come. We do have quite a long way to go at Oxford, and the world around us has even further to go, but recognising this fact is the first step towards progress and I believe that this step is taking place at Univ. Besides, the recognition and celebration of our progress so far is not mutually exclusive from committing to continuing improvement.

Admitting women into the College is one thing, but understanding our needs and catering to those needs is another. We need to continue to listen to women here and we always need to pay attention to what can be done better. It is only by doing this that we can move forward and away from the past. We mustn’t be so arrogant as to think that all that could have been done has been done. Women are a big part of Univ’s present and they will be forming an important part of Univ’s history as the years go by.