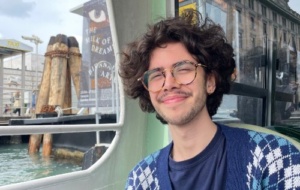 Hari is in their final year studying English at Univ. He is currently the Co-Chair of Oxford University Labour Club and part of Univ’s University Challenge team. In 2021, they played the title role of Gabriel in the Garden Play at Univ.

Why did you choose to study English Language and Literature? Has anything surprised you about the course?

I’ve always been a book nerd honestly. I took English Literature, History and Maths at A-Level, but didn’t really know which direction I wanted to go in when it came to university applications. After scouring prospectuses, I came to the realisation that I would feel as if I had really missed out if I didn’t have an opportunity to essentially read literature from every period of the English language and discuss this with people that were similarly as passionate as me. My personal draw to Oxford specifically was the course’s emphasis on Old English, something that I had written an EPQ on but that I really wanted to learn more about – no other university gives Old English the attention it deserves like Oxford does.

I think the thing that surprised me was just how much English as an academic discipline is moulded by one’s own politics and beliefs. For example, on an academic level, I am particularly interested in postcolonial theory, sexuality studies and Marxist criticism; my essay writing and thinking on literature is thus informed by these areas of thought. Yet, this is completely unique on a personal level, meaning you may go into a tutorial writing essays on the same texts as your partner, but end up having completely different focuses and ideological frameworks. Learning from fellow students’ theoretical reading is one of my favourite things about the Oxford tutorial system and something I really didn’t expect before starting. 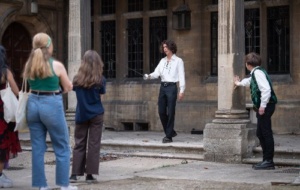 How do you think you changed since you walked through Univ’s doors for the first time?
I am definitely far more confident, both in the person that I am and in my academic ability. Going to university and going to Univ specifically allowed me to feel fully comfortable in an educational environment in a way that I never have before. Being surrounded by fellow students that are also going through the same periods of intense study as you really creates a sense of camaraderie that allows friendships and connections to develop quicker than they have at any other time in my life.

Do you have any favourite moments thus far from your time at Univ (academic or otherwise)?
A strong favourite for me was acting the title part of Gabriel in University College’s 2021 garden play, adapted from George Sand’s 1839 play by Univ’s Visitor in Arts Claire Bailey. Due to Covid-19 restrictions, we were forced to perform the play as a walking performance around college, which turned out to be ideal, providing picturesque backdrops far better than any staging could. The play is essentially about a young prince’s discovery that they are actually a woman, with the play prophetically tracing the contradictions of nonconformist gender identity. Aside from just being an amazing and academically fascinating play to have been a part of, I can also say that I am (I think!) one of the few people that has had a fencing match in Univ’s main quad in 19th century dress.

Another favourite moment for me was being on Univ’s University Challenge team this year. Before going to university, being on University Challenge was always one of my dreams – one that I thought would probably never be realised. Though I was the reserve and thus not on television, I had an amazing time training with the team and travelling up to the Salford studio for filming was genuinely one of the most nervous I have ever felt. Having an average age of just 19 really provided us with a sense of underdog spirit!

Other than that, I love being a part of Univ’s termly Shakespeare performances, getting beaten every week with Univ’s football team and getting to live in what is essentially a castle. 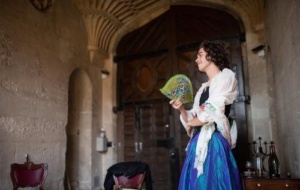 Why did you run for Co-Chair of Oxford University Labour Club? How are you finding it?
I think that as a young person in the UK right now it requires an active effort to not be interested in politics, rather than vice versa. Coming of political age in the era of Brexit’s isolationist nationalism, the climate crisis, reckonings with Britain’s colonial legacy, the existence of systemic racism throughout British society, the continued fight for LGBTQ+ equality and unprecedented attacks on women’s rights turned me into a compulsive news checker.

The fact that all this political tumult was, and continues to be, presided over by a Conservative government flooded with ineffectual Oxford privilege might make some applying to Oxford feel slightly antsy. But Univ especially has a particularly strong history for producing progressive political figures, including in its alumni the two Labour prime ministers Clement Attlee and Harold Wilson as well as the US Democratic president Bill Clinton, Australian Labour PM Bob Hawke and the political radical Percy Shelley.

In terms of the Labour Club, Univ has been a pretty dominant force in the last few years – a quick look at Wikipedia shows the sheer number of Univ co-chairs recently. After attending several speaker events and debates, I served as Membership Officer and Secretary before successfully running to be Co-Chair for Trinity Term 2022. During this term, I had the pleasure of interviewing four members of the current shadow cabinet as well as prominent Labour figures of the past and present such as Neil Kinnock, David Miliband, Cherie Blair and Hilary Benn amongst others, as well as campaigning in the local elections with our amazing MP Anneliese Dodds. Right now, my duties as Co-Chair are winding down and I am in the process of editing our termly publication Look Left!

Do you have any advice for prospective students?
I think a lot of people have the impression that all Oxford students do is work. Whilst academic work does take up the majority of my time in Oxford, the opportunities for extracurricular activities are so varied. I think on top of this I also had an image of Oxford students as either members of the Bullingdon Club or people that would be locked studying their rooms. This is definitely not the case, as I quickly found out, students at Oxford are just like students from any other university. Whilst it’s easy to fall into stereotypes of what Oxford and the people there will be like, I would encourage prospective students to consider Oxford with an open mind!

In terms of academics, I would encourage students to just pursue what they’re interested in. I know it’s a pretty standard and unhelpful piece of advice, but for a subject like English just reading your favourite writers and forming opinions based on your own thoughts and secondary criticism is really the best way to show intellectual curiosity. I guess the point I’d really hammer home is that Oxford is not an intimidating place to study: the people are lovely, the work is challenging but intensely stimulating and Univ is the best college.