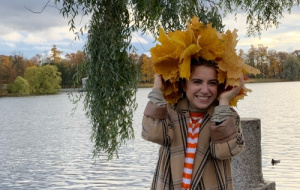 Abigail returned to Univ to do her DPhil, having studied as an undergraduate at the College. She is a recipient of the Univ-CEELBAS-AHRC Studentship. Her DPhil research focuses on the phenomenon of roofing. In this profile, she discusses how her year abroad was a turning point in her life and what she’s looking forward to most when she gets back to Oxford!

Why did you choose to study Russian and Linguistics as an undergrad?
I think most people who study Russian have that one book that made them fall in love with the language and the culture. For me it was Bulgakov’s The Master and Margarita (I then studied him as a Special Author for my finals), which I read during my penultimate year at school. I think it was this that really encouraged me to pursue learning the language, although my interest in art and the fact that I had also studied the Russian Revolution for my History GCSE had also given me an interest in the Russian avant-garde. I remember going to an exhibition on Constructivism at the Tate Modern and being absolutely fascinated. I decided to study Linguistics as well because I had a broader interest in how Russian and, indeed, other languages function in a myriad of ways.

What led you to do a Master’s then a DPhil?
For me, my Master’s was an opportunity to explore my academic interests beyond what I had been able to study as an undergrad. I had written an optional dissertation for my finals on post-Soviet Performance art and had always had an interest in Russian culture beyond the Oxford curriculum. My linguistic study also furthered my interest in material and visual anthropology as socio-linguistics was an area that I became particularly interested in and began to explore how some of the same lines of inquiry could be transferred from linguistics to artefacts of material and visual culture and how they inform understanding of society. An MA in Material and Visual Culture seemed like a really good fit.

During my time at UCL I took courses in Anthropology of Socialism and Post-socialism, Art in the Public Sphere, and Anthropology of the Built Environment which all naturally led to my dissertation topic on roofing. However, it became abundantly clear during my month of fieldwork that I had much more to say on roofing than could be put into 15,000 words, and that is how I ended up here! Although a DPhil can seem quite solitary from the outside, it is actually a team effort and I have to say thank you to my supervisor Professor Catriona Kelly, for agreeing to take me on with this project, I really cannot imagine anyone else supervising my thesis – her knowledge and advice is so valuable, and also Professor Polly Jones, who is my college advisor but was also my undergraduate tutor here at Univ and really encouraged me to explore my interests in cultural anthropology and Russian material culture. 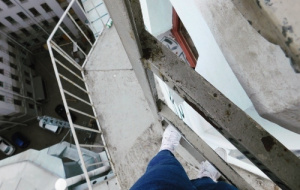 How did you come across roofing?
Prior to studying the activity, I had been on a roof once on my year abroad (although it wasn’t quite in the same way as my participants). While I was doing my MA, I had a conversation with a Russian friend who told me that her boyfriend was involved in roofing. I was really lucky that he agreed to talk to me, and I was able to make connections through him as he was willing to vouch for me. It snowballed from there. Although I had an initial hypothesis, the fieldwork process has taught me to be flexible and I have been constantly surprised by my participants. The project I have now is vastly different from the one that I started with as the things I initially thought would be important have fallen away and other issues have come to light through conversations with my participants. It’s also been exciting to observe the real-time changes to the activity that have taken place since I first began researching roofing in 2017. I have been up on the roofs in the past (although I am definitely more risk averse than my participants) but unfortunately am not able to do so at the moment because the Oxford Research Ethics Committee would not approve that part of my methodology. Being able to carry out fieldwork is amazing, even if it is at street-level, and I am always grateful to my participants for opening up their lives to me.

How has your postgrad experience at Univ differed from your undergrad one?
I find it hard to compare the two experiences as I am at such a different stage of my life now, than I was as an undergrad. I first came to Univ at a very formative period of my life, and my experience then has had such a profound impact on where I am now. The one thing I would say is that I really value the efforts that Univ has made with regards to sustainability, accessibility and pastoral care over the past few years, and I have seen a lot of progress since I first started in 2012. Although there is still a lot of work to do, I think this has been a key difference between the two experiences.

How are you finding research during the current situation?
I was away carrying out my fieldwork when the situation started to change, and I was forced to return following a change in the foreign office advice. Not being in the field has forced me to rethink the way I communicate with my participants, as a large part of my methodology is participant observation (which can be thought of as sustained ‘hanging out’) and so involves being in the same place. Luckily, as face-to-face social interaction became limited both here and in Russia, my participants were much more willing to talk to me virtually than they were pre-COVID, mostly out of boredom as they were also stuck at home. Although it has, undoubtedly, been a struggle, I’m glad I have been able to keep things ticking along and hope that I will be back in the field as soon as I can to finish up my research. 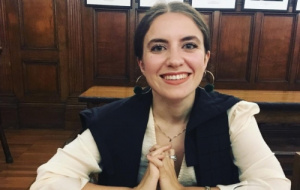 Have you faced any challenges in your life that you are happy to share here?
As an undergrad I was extremely anxious, and definitely suffered from imposter syndrome. When I started at Oxford I felt as though my language skills were behind my peers and I had a really tough time learning vocab. I felt I had to work twice as hard just to try and catch up to where everyone else was and as though I had conned my way in. I was putting in unreasonable hours in the library studying overtime so that I wouldn’t be caught out.

A crucial turning point was probably my year abroad in St Petersburg, which just allowed me to enjoy being a Russianist, and was the point at which I began to explore my other academic interests. I had always been more interested in the culture side of the course than I was in the language. I was lucky enough to receive an Old Members’ Travel Grant from Univ to fund a language course in St Petersburg for 12 weeks and completely fell in love with the city. I ended up changing my plans for the rest of the year after getting an internship at the State Hermitage Museum and stayed in Petersburg for eleven months, rather than the three I had initially intended. It was such an important time for me: getting to know the culture and the history and meeting my Russian peers. My research now is mostly focused on the city and was initially precipitated by a conversation with a friend I made during this time, so I think it is safe to say that I owe a great deal to that year as a formative time in my career. 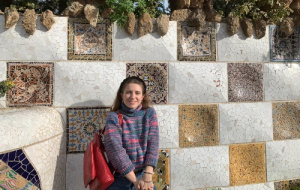 What are you most looking forward to doing in Oxford when life gets back to a semblance of normal?
I am lucky that my research has allowed me to spend much of the past academic year in St Petersburg as I have a visiting studentship at the European University there, funded by a Scatcherd European Scholarship. It feels like I haven’t been in Oxford for forever (in reality it was February). I never thought I would miss the library as much as I have! Really, I am just looking forward to seeing people, and although I have enjoyed my Teams seminars this past term, I can’t wait to actually be in a room with people whenever that may be. Of course, my first priority will be to get back out to Russia to tie up all the loose ends of my fieldwork!

Describe Univ in three words.
If you’d asked me when I was an undergrad I probably would’ve said “Thursday Night Bridge”, but today I’ll go with history, community, and excellence.