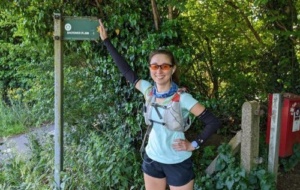 The Oxford Green Belt Way is a circular route around the city that offers excellent views of Oxford, Otmoor, Foxcombe Hill and Wytham Woods. It was created by CPRE (Campaign to Protect Rural England) Oxfordshire in 2007 to mark CPRE’s 75th birthday and to highlight the importance of the Green Belt, which was created around Oxford 50 years ago.

Maria commented, “Based on my 30-mile simulation, I went into the day thinking it would take 13-15 hours, but it ended up being longer! The first third went pretty much as expected based on my April trial run – but a pacer change meant I had to cover a little more solo at the beginning. It was such a mood boost to finally see Dave and Sebastian waiting for me at Abingdon Lock!!”

“At times it just felt like a normal Saturday long run, like when a runner stopped to ask me directions to Radley Station. In general, things were going smoothly until mile 20-something when left knee pain started (something I hadn’t experienced before) and I had to take more walking breaks. By mile 30, I was pretty much reduced to fast walking. I had a few little jogging pick-ups on the Oxford Canal (thanks Ivan for the stories and boat jokes here) but after the turn at Thrupp, I could only run for 5-10 seconds before the knee pain was aggravated. A slower pace meant the layers came on (added about one per aid station in the last 15 miles), and head torches were ready!” 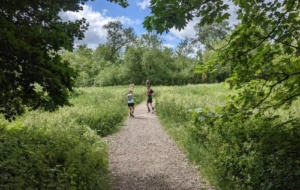 “While I was expecting some ‘healthy’ green springtime vegetation, I was not expecting waist-high fields of oilseed rape (which meant high-stepping/getting tangled in stems and felt like what I imagine bushwhacking is) – had a major sobbing meltdown here, around mile 42. We also encountered very tall grass and nettles around the Cherwell and Sescut Farm fields, this time with head torches – making it feel a bit more ominous. My knee (and legs in general) felt the same until about mile 50 – but had a major pain at mile 52 where it took me about half an hour to cover one mile (lots of bent-over waddling with hands on knees, where I tried to walk more with glutes to put less pressure on knees). I truly considered giving up here (it was dark and cold, and I was in the most pain I’ve ever felt while running/walking) but Sebastian convinced me to take ibuprofen and I was able to keep going.”

You can read more about Maria’s running adventures here.

Professor Charlotte Deane has been appointed…