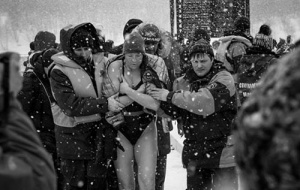 Maria is a double world champion in the sport and now runs extreme cold water swimming adventures. She has been coaching novice Joseph, a criminal lawyer and legal commentator, for next week’s event – his debut ice swim.

The pair will be getting very chilly in aid of Centrepoint, the UK Homeless Children’s Charity, and the Maria Centre, a local charity for Siberian orphans.

Arts Week got off to a flying start…