With the invaluable assistance provided by the college’s Old Members’ Trust, I was able to undertake a research trip to the United States this summer for my DPhil dissertation. My doctorate focuses on Northern Protestant missionaries who evangelised in the South and West following the American Civil War, seeking to spread not only Northern Protestantism to the rest of the country, but also Yankee economic, cultural, and political values.

The first research archive I visited was the Presbyterian Historical Society in Philadelphia, Pennsylvania, located just a five-minute walk from the historic Independence Hall. The Society, established in 1852 to house the Presbyterian Church’s extensive collections, contained the records of the church’s Board of Home Missions. Given the archive’s denominational specialty, these collections were extremely detailed and included everything from enormous ledgers that painstakingly recorded missionaries’ salaries to evangelical magazines that would have been read by ordinary Americans across the country. The Society also possessed remarkable manuscript material on the role of women and children in fundraising for home missions. I discovered the written records of several Ladies’ Sewing Societies – social and religious clubs where women would gather to sew items of clothing and donate the proceeds made from sales to the home missionary cause. Their records give us an illuminating insight into the ways in which ordinary household economies, fuelled by their inhabitants’ strong civic and religious convictions, were used to support the Republic’s evangelisation. 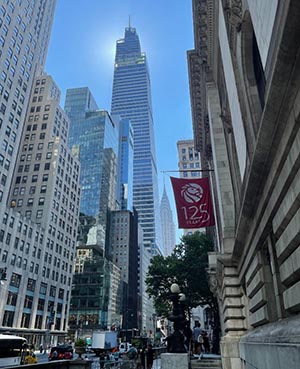 Where the PHS offered a calm and intimate environment for research, the second archive could not have been a more different experience. After Philadelphia, I travelled to New York where I spent the next week in the New York Public Library’s Schwarzman Building situated in Bryant Park, a lively block of greenery in midtown Manhattan. The NYPL is one of the largest public libraries in the world, and the building’s physical grandeur reflected that. The great advantage of the NYPL’s vast collection is that it contains sources from a wide variety of Protestant denominations, including the Congregationalists, Presbyterians, Baptists, Methodists, and Episcopalians. A single trip here meant I was able to kill quite a few birds with one stone. In particular, I was able to find several missionary periodicals, newspapers published by the missionary boards that formed the primary connection between evangelists on the ‘frontline’ and their supporters on the home front. I spent most of my time in the Rose Main Reading Room, perhaps the most famous and recognisable part of the library, which was an extraordinary environment to work in.

Given the restrictions of the pandemic, this was the first time since I had started my DPhil that I was able to perform archival research in person. It convinced me that historical analysis done at a computer – however fruitful it can be in practice – is no substitute for a physical interaction with the evidence. Handling the same material that the people whom I write about would have held in their own hands more than a century ago was a transformational and quite emotional experience, and I’m thankful I was able to enjoy it at last.