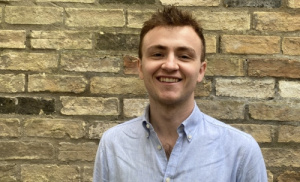 Oliver Jones (2018, DPhil German and Russian) has just been announced as the joint winner of the prestigious Forum for Modern Language Studies prize for 2021 for his article “Reading Implication: Moral Injury in Heinrich Böll’s Billard um halb zehn and Vasilii Grossman’s Vse techet.”

Oliver’s research interests lie in comparative literature and memory studies with a particular focus on the twentieth-century Russian and German contexts. His DPhil project compares the work of the Soviet-era Russian author Vasilii Grossman and the Nobel Prize winning German writer Heinrich Böll, funded by a CEELBAS-AHRC studentship and a Senior Scholarship at University College. Previously, he completed his master’s degree in Russian at St Antony’s College, Oxford, and his undergraduate studies at UCL with semesters at St Petersburg State University and Humboldt University of Berlin.

Alongside his DPhil, he has worked on a number of interdisciplinary research projects in Oxford, including Free Speech Debate and Europe’s Stories. He was also a visiting research student in history at the Higher School of Economics, Moscow, in 2019 and a visiting fellow at the Davis Center for Russian & Eurasian Studies at Harvard in 2020-2021. Oliver has given lectures to undergraduates in the Russian sub-faculty on topics including Anna Akhmatova’s Requiem and the history and memory of the Gulag. He has also taught tutorials on nineteenth-century Russian literature at University College and Brasenose College.

Oliver commented, “I’m delighted that my article has been selected as joint winner of the Forum Prize 2021 and will be published in the journal, Forum for Modern Language Studies. The essay is based on my DPhil research, which is supervised by Univ Fellow Professor Polly Jones and Professor Carolin Duttlinger, who is based at Wadham. I’m very grateful to Univ for supporting my research.”

Elections have been held…