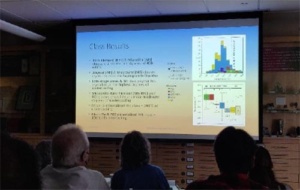 The typical set up for the morning lectures: lots of plots, many questions, and very interesting discussions!

Between 6 and 14 September, I attended the Maine Pegmatite Workshop (MPW) in Bethel, Maine. This workshop is a world renown course which covers the fundamentals of pegmatite geology. Pegmatites are a traditionally understudied group of igneous (think volcanic) rocks that host economically vital mineral deposits. They have recently gained much attention due to their potential to host critical raw materials, such as Lithium (required for Li-ion batteries) and Niobium (required for the production of the magnets for windmills). My DPhil project studies a period in geological time called the Archean, which spans from 4 – 2.4 billion years ago, during which the very first mineralised pegmatites form. I hope to understand why they formed in the Archean, and what that might tell us about the onset of plate tectonics on Earth. 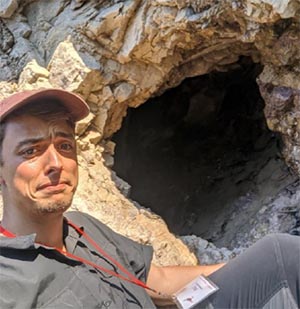 Me sitting next to a mined out “pocket”, which contained gem quality quartz, tourmaline, and aquamarine crystals.

This is why the MPW was a valuable workshop for me to attend: it has direct value to my DPhil project and expertise in pegmatites is few and far between. To have the opportunity to meet and talk to attendees from among others the USA, Canada, Australia and Portugal was invaluable for my development. It has already been fruitful as I have started a collaboration with colleagues in Canada and Portugal off the back of this workshop.

The workshop itself was also great fun. Each day comprised of morning lectures, hosted in the beautiful Maine Mineral & Gem museum. The lectures covered mineralogy, geochemistry, and the background geology of pegmatite formation, delivered by experts in the field.

We then had field trips during the afternoon, where we would see what we covered in lectures in actual outcrops. This was invaluable to consolidate my understanding of pegmatites, as it is often quite hard to imagine when just looking at geochemical plots! Some of the outcrops we visited were very interesting and offered world-class exposures of pegmatites. On the left is a picture of what is called a “pocket”, out of which gem quality crystals are mined. We were also lucky enough to see how these are mined and were taught about indicators that can tell you where to find them. 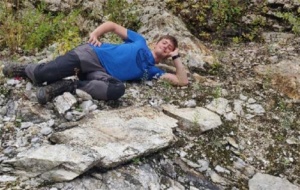 Me posing alongside a large spodumene crystal. These crystals contain an economic quantity of Lithium, and is the primary source of Lithium in the world today.

What I found most spectacular from the field excursions was the Plumbago North mine. This mine contained spodumene (an important Lithium bearing mineral) crystals that reached up to 10 metres in length! They are currently trying to see whether they can mine it economically. Geopolitically, Lithium is an interesting metal because although it is mined in several different countries, it is exclusively processed in China. To secure a safe supply for the political West, much more will need to be done to ensure we retain more control over the full supply chain, rather than just the mining side. 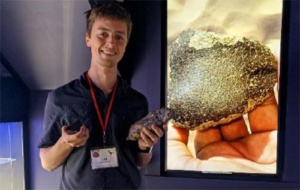 Holding a Lunar meteorite (right) and a Martian meteorite (left) at the same time! Meteorites from planetary or moon bodies are incredibly rare, so I could not miss out on a photo opportunity!

Finally, on the last day of the workshop, we were given a private tour of the Maine Mineral and Gem Museum, which also (surprisingly) contains the world’s largest collection of meteorites. The owner was generous enough to allow everyone to handle both Lunar and Martian meteorites, which was a truly inspiring moment for a space fanatic like me!

Not only was the MPW invaluable for my understanding of pegmatites, it allowed me to meet other researchers in the field and contained some truly inspirational moments. This trip would not have been possible without Univ and the Old Member’s Trust, and I cannot thank them enough for their support in funding this trip.