In celebration of his 70th birthday, Old Member 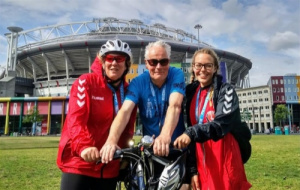 Herbert Knott (1968, PPE) set off from London aiming to cycle all the way to Amsterdam raising more than £2,500 for Prostate Cancer UK along the way.

Herbie covered the 142 miles in 14 hours despite torrential rain and fierce winds, which blew two of the cyclists with him off their bikes. He did all his training and the ride on a bike which he picked up in an auction for £23!

Prostate Cancer UK works on several fronts to combat prostate cancer. They have invested over £37 million into research for new treatments and diagnostic tools. The charity also run awareness campaigns encouraging men to visit their GP, and support men who have cancer.

Herbie has already raised over double his £1,200 target but you can still donate money via his Justgiving page.

Our latest Univ in the Arts event took place…

Members of the 1249 Society were warmly welcomed…