We at Univ today agree that the origins of our College lie in the bequest made by William of Durham in 1249 to create a College to support Masters of Arts studying theology. You can read more about the real origins of Univ in our August, 2013 Treasure. However, for many centuries it was agreed that Univ was actually founded by King Alfred, to the point that it was formally admitted as fact after a court case in 1727.

Over the next three months, we will be displaying some College treasures linked to our relationship with our adopted patron, and so we begin by travelling back to the 1380s, to uncover the origins of the myth.

At this time, Univ was engaged in a dispute over some of its properties which, if we were to lose, would deprive us of one third of our gross annual income. Unfortunately, things had not been going well for us in the Court of the King’s Bench, and the only way we could find help now was to petition the Crown to have our case heard in the King’s Council.

During the 1380s, the Master and Fellows of Univ submitted various petitions to the Crown, to seek a hearing, generally without success. Then, in 1384, they submitted the one which is shown here. Our copy comes from a long parchment roll containing several documents relating to the lawsuit. To be fair, it is not a very beautiful treasure, but this piece of parchment matters, because it marks the start of the whole King Alfred legend. 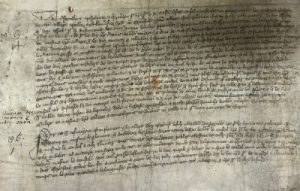 “To our most excellent, most great, and most reverend lord, our lord the King and to his most wise council, your poor petitioners the Master and Scholars of your College called Great University College in Oxford, which College was first founded by your noble ancestor King Alfred, whom God preserve, for the maintenance of 24 perpetual divines.” 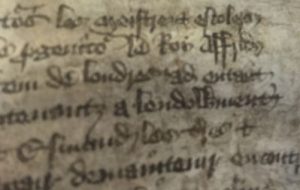 On the second image (Fig.2, right), you will see a close-up of the magic words “le Roi Alfrid”.

The Master and Fellows were evidently anxious to throw everything they could into this petition, because, as is seen on the third image (Fig.3, below), they say, near the end of the petition, that: 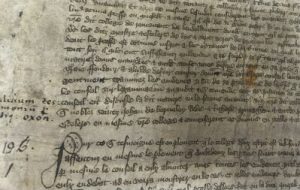 “the noble saints John of Beverley, Bede and Richard of Armagh and several other famous doctors and clerks were once scholars in your same college.”

Richard Fitzralph, Archbishop of Armagh in 1346–60, had studied at Oxford in the early fourteenth century, but there’s no evidence that he was a member of Univ; on the other hand, John of Beverley and Bede had both died over a century before Alfred had even been born. So the Fellows were pushing their luck a bit.

Where had this remarkable story come from? For some years, it had been claimed that King Alfred had founded Oxford: he was a very learned king, after all, and so it was easy enough to think that, surely, he had founded England’s oldest university. In 1384, then, the Master and Fellows of Univ went one better, and suggested that Alfred had also founded this College.

There might also be a reason for the Master and Fellows trying this one on: the young Richard II took quite an interest in his family history, and, among the petitions being submitted to him, one which mentioned one of his great ancestors might just attract his attention.

But did it work? Just about: the case was indeed heard in the King’s Council in 1389, and in 1390 a compromise was reached, whereby Univ retained the property but paid compensation to their opponents. It’s hard to say just how useful the appeal to King Alfred had been apart from (possibly) obtaining the College a new hearing. The important thing was that he had been linked with Univ, and later generations, as we will see in the next two treasures, were delighted to bask in the reflected glory of our eminent “founder”.

The last of our Treasures relating to Univ’s adoption…