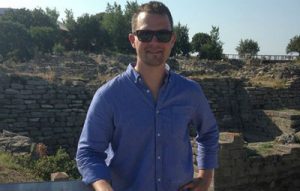 I am very grateful for the support of the Old Members through the travel grant I received to attend a conference on Kant and moral psychology in Istanbul, Turkey, along with a conference on Aristotle’s ethics in Assos, Turkey.

As my doctoral thesis focuses on Kant’s theory of moral character, the conference on Kant and moral psychology was directly related to my research in Oxford. This conference was held at Boğaziçi University, located in a pleasant, hilly area toward the north of the European side of Istanbul and offering a beautiful view of the Bosphorus. The conference was organized by two Kant scholars at the university, Ken Westphal and Lucas Thorpe, and it brought together a number of other scholars from Turkey, the UK, the United States, and Europe. The paper I presented was titled ‘Education as character formation in Kant’s Pedagogy and Anthropology’ and it figures prominently in a chapter of my thesis. The presentation went very well and I received some valuable feedback on it both during the Q&A session and conversation afterwards. It was wonderful to receive feedback and warm encouragement in my broader project from senior scholars I had not previously met. Other topics presented on included, among other things: moral worth and moral motivation, the concept of moral integrity, Kant’s relation to Aristotle, and Kant’s theory of maxims as an alternative to belief-desire psychology. During the course of the conference I made a number of friends and acquaintances with similar interests, with whom I have kept in contact since. 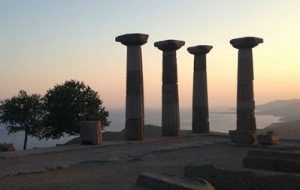 The scholars and students at Boğaziçi have a tradition of heading to the coastal town of Assos in June-July, where they meet with other Turkish philosophers for an annual conference of varying degrees of formality. This year’s conference was quite formal in its organization and the theme was Aristotle’s ethics. A number of international and important scholars in Ancient philosophy were present to give papers. Topics covered included: goodness as cause, the place of affect in the Nicomachean Ethics, and Aristotle’s concept of practical truth, among other things. As I am very interested in Aristotle and have written lightly on his work in ethics, this was an additionally helpful conference to attend. I also had the pleasure of meeting Professor Chris Shields again, who chaired my transfer of status examination and has since moved to the University of Notre Dame in the United States. I had the further pleasure of speaking with Katja Vogt about Kant’s ethics and theory of character in particular; Katja is perhaps most known for her work in Ancient philosophy but has also written and reflected a great deal on Kant. Her feedback and encouragement was particularly valuable.

Those responsible for organizing the conference in Assos had also arranged an open air concert featuring a solo violinist from Germany. This was held throughout the sunset and early night in an ancient Greek amphitheatre, situated below the ruins of an equally ancient Athenian temple and overlooking the Aegean with the island of Lesbos in the background (I’ve included a photo of the temple). For after the conference, the local organizers also arranged a trip to the site of the ancient city of Troy, which I was invited to attend (I’ve included a photo of myself with the city in the background). I hadn’t imagined I would have the opportunity to see firsthand one of the main stages for Homer’s epic poetry. Both of these visits were an immense pleasure and made my trip to Turkey culturally, in addition to academically, enriching. Once again, I am very grateful to the Old Members for making this possible through the Old Members’ Trust.