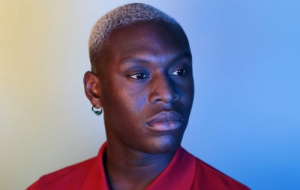 Otamere Guobadia (2012, Law) is presenting the new series “In Love with Otamere” on Jameela Jamil’s YouTube channel. In Love with Otamere sees Otamere interview his guests about their greatest loves, lusts, heartbreaks, and infatuations — from the romantic to the filial and the familial.

In the first episode, writer and performer Tom Rasmussen (author of Diary of a Drag Queen) joins Otamere to talk about their three more influential loves: their grandmother, their musical partner and their drag alter-ego.

Otamere’s writing focuses on desire, queerness, art, race, love, and pop culture. His work has been published in publications including Dazed, Wonderland, Crack Magazine, Gay Times, Guardian and Cause & Effect. Last October, he wrote an Open Letter to Queer Britain (Vogue) as part of a Queer Britain initiative supported by Levi’s UK and the Post Office. He is currently working on his first book.

While at Univ, Otamere edited the Oxford-based queer and trans publication No HeterOx and was President of the Oxford University LGBTQ society.

On Thursday 11 February a joint…