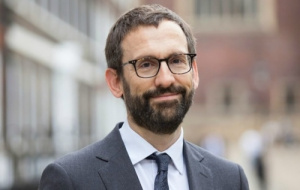 Richard Meade QC (1985, Law) will now be known as The Honourable Mr Justice Meade, having been approved as a High Court Judge. He took up the appointment on 7 September 2020 and will be assigned to the Chancery Division.

The Honourable Mr Justice Meade was called to the Bar in 1991 and took Silk in 2008. He was appointed as a Recorder in 2009 and authorised to sit as a Deputy High Court Judge sitting in the Chancery Division.

He grew up in North London where he attended a state secondary school before going on to study at Univ, graduating in 1988.

After Univ, he worked at Andersen Consulting on IT projects. In 1991 he was awarded the Scarman Scholarship for coming first in the Bar Vocational Course. Richard went on to specialise in intellectual property and commercial work relating to technology and the music business. He has also appeared in the Court of Justice in the European Union and the European Patent Office.

Visitor in the Creative Arts 2020

Lucy Fisher will be joining The Daily…

Hosted and curated by Roz Savage…