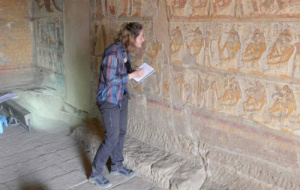 During Hilary term of my second year, I spent two and a half weeks with the Hierakonpolis and Elkab excavation teams in Egypt, with the aim of gaining comparative material for my research and first-hand archaeological experience.

My first week in Egypt was spent at Hierakonpolis where my main project was assisting with the cleaning and recording of a 3.5m granite door jamb which had been buried since the 1980s. This involved careful removal of the dirt and debris followed by epigraphic and photographic documentation. During my stay, I was also able to learn about trench excavation in Egypt, including the system of locus recording and practical excavation techniques. 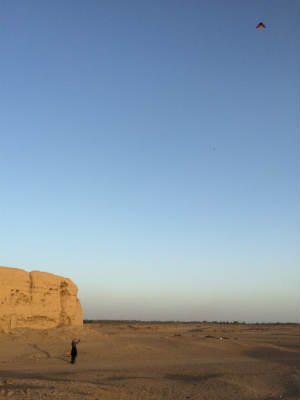 The next leg of my trip was at Elkab where I spent the first few days studying and recording tombs, which form comparative material in my thesis. For my DPhil, I focus on the representation of women in early- mid 18th Dynasty tombs in Luxor, analysing how the female relatives of the male tomb owners are portrayed compared to one another. At Elkab there are three early 18th Dynasty tombs which each includes a considerable number of female relatives, allowing me to include data from contemporaneous but different geographical locations in my research to explore regional differences and/or similarities in the representation of women.

There is no true alternative to witnessing ancient Egyptian monuments first-hand; especially in the study of tomb iconography and architecture, being able to experience a tomb in its archaeological context gives you a unique perspective on the data. For example, which scenes have the most audience impact, and the interplay between architectural elements such as columns and their iconography. It is also useful for clarifying the publications and reproductions of these tombs, which often contain errors and misreadings. Having completed this work, I was able to further practice my epigraphic skills in both tomb and temple contexts, and take part in surveying and photography of the necropolis. In particular, I had the chance to assist with aerial photography and photogrammetry of both Hierakonpolis and Elkab, the processing of which will continue when I am back in Oxford.

Overall this trip was very useful, not only for providing me with more data for my thesis, but the wide range of skills I was able to gain will benefit future fieldwork and excavations, which are crucial elements of academic Egyptology.

I would like to thank University College for their generosity in enabling me to take part in this incredible fieldwork opportunity.