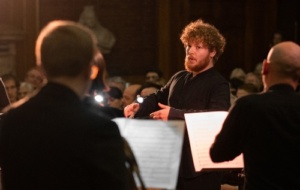 Serse is an 18th-century romantic comedy. King Serse falls in love with the voice of his brother’s beloved, and tries to use his authority to force her to marry him. An exploration of power, desire, and human frailty, Serse features some of Handel’s most striking music, including one of his most famous arias, “Ombra mai fu”. In this production, directed by movement specialist Sam Rayner, a physical theatre ensemble will bring the vibrant atmosphere of Serse’s court to life alongside a cast of acclaimed singers

Figure is a historical performance ensemble, established last year – in the wake of the lockdowns – as a group to represent the rising generation of musicians. It aims to expand the scope of historical performance beyond the typical baroque and renaissance repertoire – anything originally performed on gut strings is their domain. They value intimacy in performance above all, the human connection which gives music meaning, and strive to bring the audience as close in as possible, while using space and light to create an environment best suited to receiving music.

Frederick has performed across genres on stages from the Wiener Musikverein to Latitude Festival. In 2017, he founded Ante Terminum, a cross-arts production company specialising in immersive and site-responsive performance, whose debut Curlew River was praised as “a pearl of a production” by Richard Bratby of The Spectator and “dedicated and moving” by Rupert Christiansen of The Telegraph. Frederick also composes and arranges music for theatre and film. Highlights include Timetravellers at Teatr Lesi, Lviv, a 2018 play about the invasion of Donbas by award-winning Ukrainian playwright Anastasiia Kosodii, and AMERICA! with Voloz Collective for ARS NOVA’s AntFest in New York. He founded Figure in 2021.

You can reserve tickets here.

The David and Lois Sykes Scholarships for…

UCBC had a fantastic week…