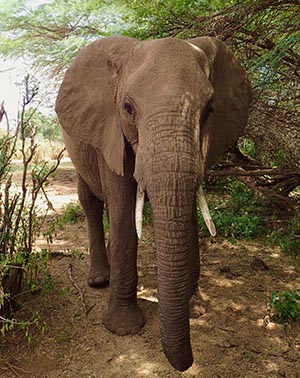 A new Oxford University study has revealed a new way to remotely monitor elephant populations and their movements without having them in sight – through seismic vibrations.

The research, published in the May edition of the top-ranked journal Current Biology, is the result of an interdisciplinary collaboration between zoologist Dr Beth Mortimer from the Universities of Bristol and Oxford and Earth Scientists at the University of Oxford, including Univ Junior Research Fellow Dr Paula Koelemeijer.

The team started working on the seismic signals of elephants in 2016 through the joint supervision of a final year undergraduate project.

Previous studies debated whether elephants could utilise seismic signals to communicate over distances longer than the acoustic communication range. The initial aim of the study was to resolve this debate through the use of more advanced seismological methods, which are commonly used to study the structure and dynamic processes within the Earth.

Due to their large size, it is perhaps unsurprising that elephants generate vibrations through their normal movements, e.g. running, walking. However, they also produce detectable seismic vibrations through low-frequency vocalisations, known as rumbles.

To measure the ground-based seismic signals generated by different elephant behaviours, the team used small sensors called ‘geophones’ in Kenya’s Samburu National Reserve. Additional recordings of background seismic noise and car noise were collected, as these may obscure the signals generated by elephants.

By combining these recordings with controlled-source experiments, the team could determine for each elephant behaviour the corresponding source function – the force strength and pattern generated by the elephant. These source functions were used as input in numerical simulations of seismic wave propagation in realistic geological settings. These simulations, in combination with the noise recordings allowed them to quantify how far the seismic signals of different elephant behaviours travel through the ground.

The computer models developed in the study indicate that the seismic signals due to elephant vocalisations are detectable beyond what is audible, suggesting that elephants can use ground-transmitted information to know the whereabouts of the rest of the herd, even over several kilometres, depending on terrain type.

Differences in elephant behaviour also caused detectable changes in the source functions, which remained distinguishable during seismic wave propagation up to 1000 m. Based on this, the team developed a method to classify elephant behaviours remotely, which has the potential to provide real-time information on elephant distress and poaching threats.

This study demonstrates the versatile nature of seismological techniques; they are not only useful for studying the structures in the deep Earth, which Paula normally focuses on, but they are also well suited to solving problems in conversation monitoring.

Further details on the Current Biology and Earth Sciences websites.

News of the research has also been reported in The New York Times and Daily Mail.

College now has its very own…